Yet another early start had us saying farewell to Cleveland, and Ray battled traffic as I caught a few more hours of sleep in the passenger seat.  The combination of the insane traffic in Cleveland, and the traffic encountered in DC/Virginia, were behind schedule the whole day. Crazy downpours (and apparently flood warnings) kept the roads slow, and we didn’t arrive to the Stephen F. Udvar-Hazy Smithsonian Air and Space Museum until almost 3:30.  This is one of 2 components of the Air and Space Museum.  The more commonly visited part is on the mall in the centre if DC, but this part is in an airport hanger out at Washington Dulles International Airport – and requires a car to get to.  So we stopped   This is also the part with the Enola Gay, the Enterprise Space Shuttle, the Concorde, Gemini VII, and so much more.

When we were pulling into the airport we were driving amidst the greater rainstorm we had ever experienced.  There was a point the rain hit the window so hard that we couldn’t see more than 3 feet in front of us – making it a slow and scary drive into the parking lot.  Then of course there was the challenge of getting from the car into the museum.  By the time I walked in the door, it was as if I had taken a shower – dripping wet from head to toe.

The museum was amazing!!! Though we didn’t have as long as we would have liked, we stayed right until closing – trying to get the most of out of our time there.  The museum had the Enterprise – the first space shuttle built – and a Saturn 5 rocket.  There were the helicopters from M*A*S*H, the airplanes from Top Gun, and as I mentioned already – the Enola Gay – the airport to drop the first atomic bomb on Hiroshima in the second world war.  There was also some special black plane that Ray was really stoked about.  The planes were arranged by era, so moving through the museum told a story in the development of space flight.  I wish I had more time, and knew more about airplanes than I did – but there is always next time. 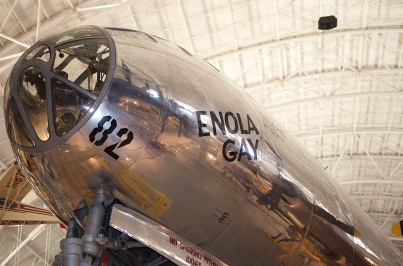 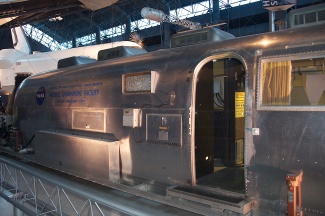 We assumed that our tickets to the Washington Nationals game would be canceled given the epic rain, which is why we stayed until closing. But apparently those rain storms weren’t in the DC core.  We rushed as much as we could through traffic to our hotel in Arlington,  then called a cab, and got to the game moments before the first inning began. The stadium was not full, and we were still “early” so we got free hats (yay?), and a change to sneak some lower level seats to take in the event.  And since I talked about mascots previously, I must note the mascots for the nationals are….presidents!  Oh America… 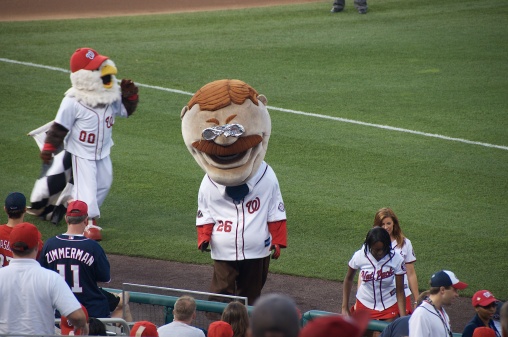