I don’t know if any of you have been watching the news, but it seems most of the states is in the middle of a major heat wave. I am here to tell you that it is no lie. Yesterday in DC it was 39 with the humidity. Today it is 34 before humidity here in North Carolina. We arrived, set up the tent, and headed straight for the ocean. We jumped into the waves to cool off, celebrating that were were FINALLY in the Atlantic! We did it! We made it from Pacific to Atlantic. 12 days and a million beautiful moments in between.

There was nothing too eventful about the drive down here. 7 hours on the road, part of which I was asleep. We eventually crossed state lines from Virginia to North Carolina, and everything started to change. It was amazing to drive over all of these bridges and through tunnels and be so close to water at every turn.  With the goal being to meet the Atlantic, each peak of the blue made the day that much more exciting. The outer banks (the sliver of land off the coast of NC, barely visible on a map) is amazing!!!! In fact, most of our friends and family would love some aspect of this place. There is surfing, boogie boarding, kiteboarding, fishing, kiting, sand, sun, waves, beaches for miles, swimming and relaxation. The land is pretty narrow (easy walk from east to west, maybe about 400 yards across at most). There are lots of little shops and mini golf places and tons of seafood restaurants. Its not easily accessible so it’s pretty quiet and spread out – touristy, but not over-run with tourists. There are two sides to Hatteras Island. To the east is the Atlantic ocean. Fully open, pounding against the shore.  This area is called the graveyard of the Atlantic because the cold Labrador current meets the warm Carribean and there is a history of sinking ships. The west side of the island is the sound, located between Hatteras and the mainland. This side is quiet with flat water. More fishing and kayaking etc.  Both sides have beautiful white sand beaches. We will definitely be coming back again – maybe rent a cabana or condo and stay a week or two. The ocean is so beautiful and warm (75 F today in the water!) we actually considered bailing on Atlanta for more time here. It is truly a gem (also, huge pirate theme; Blackbeard lived and died here). 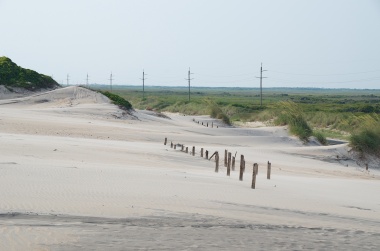 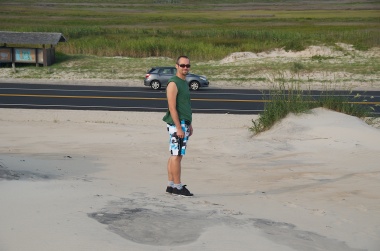 When travelling south to the island you will drive through Kitty Hawk – the town where the Wilbur brothers flew the first airplane.  There is a national monument and visitor centre in their honour – one of our short stops on the days journey.

Then there was the beach, the Hatteras lighthouse, and tons of cute little beach shops calling my name.  The sand was silky and the sun was a little too warm, but the ocean breezes help bring a little sanity to the unending heat bubble.

The next morning, before departing (sadly) for our next destination, we stopped at Jockey Ridge state park, to climb the tallest sand dunes on the east coast, though not quite the Great Sand Dunes of Colorado (which I wrote about here), though these ones have an ocean view, so that gives them the edge).  We started the hike early, as the signs advised that we try beating the heat of the day.  But even an 8:00 AM hike was too hot for me, and only Ray made it to the top. 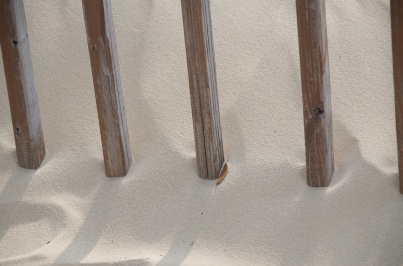 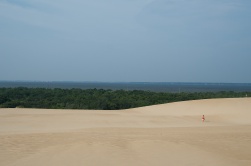 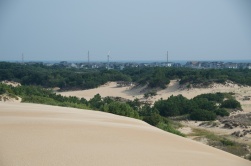 And with that it was time to say goodbye to North Carolina.  24 hours wasn’t nearly enough, but it’s okay – we will return.

One thought on “A foot in the Atlantic”