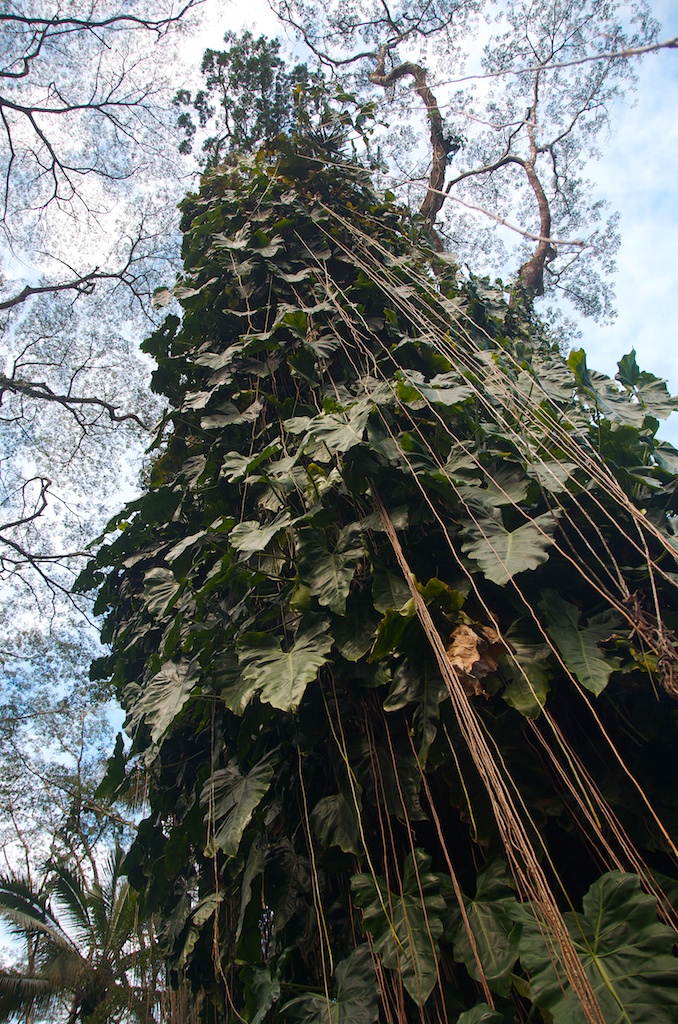 Yesterday was a lazy day.  The goal was to stay home, let Amelia catch up on sleep, let Raymond sleep in (his one request) and just take it easy.  As you can see from the last post, this involved time to take Amelia into the pool as well.  But of course, our household had a pair of D7000’s screaming to get out of there bags and out into the area to shoot something.  So me and Chris took a couple small adventures into the surrounding area.

First we went to Lava Tree State Park.  A lava tree is one that forms when lava surrounds an existing tree and starts to flow upwards, and burns the tree inside, leaving tall pointing tree like structures of black lava.  The park was also rich in giant trees and ferns and overall lovely views.  Though it must be said, that some of that lava trees has some…um…interesting shapes….

Only a few hours following our afternoon jaunt to the Lava tree state park, we went for an actual trip out to try and photograph some lava flows – as in the bright red, visible at night, boiling hot, flowing lava.  Turn out there is a lava viewing site that is privately owned that is outside the park and only 25 minutes from here.  So we left just before sunset to find this site, and then planning to drive up to the crater shortly after.  When we got to Kalapana (the private site) and went to park the first thing we were asked is if we brought flashlights…um…no.  Didn’t think of it.  Apparently the walking from the parking lot to the viewing site is 10 – 15 minutes, and it’s pitch black.  “Luckily” there was a guy standing at the beginning of the walk selling flashlights and headlamps.  So we bought out headlamps (that definitly came in handy) and headed out to the fields.  We were there among a series of photographers and their tripods, trying to find a good spot to view, and waiting for the sunset.  I was very VERY fortunate to have a good friend and colleague Tony lend me his 150 – 500mm lens – because you needed the full 500mm to get close enough to make the pictures worth it.  The lava we set up on was just 1 year old.  The whole field we walked through was covered in houses – apparently for 25$/year in taxes people can build houses on the lava.  They are totally off the grid – they just pick the flattest piece of land and build. I don’t know if it would be my first choice….

Anyway, so we get out there and get set up and wait for the sun to set while working through a trial and error of finding the best settings to shoot this burning lava in the distance.  I couldn’t figure out why my pictures kept coming up blurry when I used long exposures until the Polish couple from Chicago pointed out the IS was still set on the lens…felt pretty stupid about that one.  After that it was snap snap snap and Voila!  My first decent lava shots.  Course then I shared the lens with Chris so he could do the same.  It was a spectacular view!  Course by the time we packed up it was PITCH black (needed the headlamps just to put the cameras away…and of course to find the car!) and late and we had been there for 2 hours!  So we didn’t make it up to the crater…but are planning on it for Wednesday night.

SO this is what I have so far (they look better if you click on them to open them up in a larger size)…hopefully I’ll shoot some more this week before we have to go home.