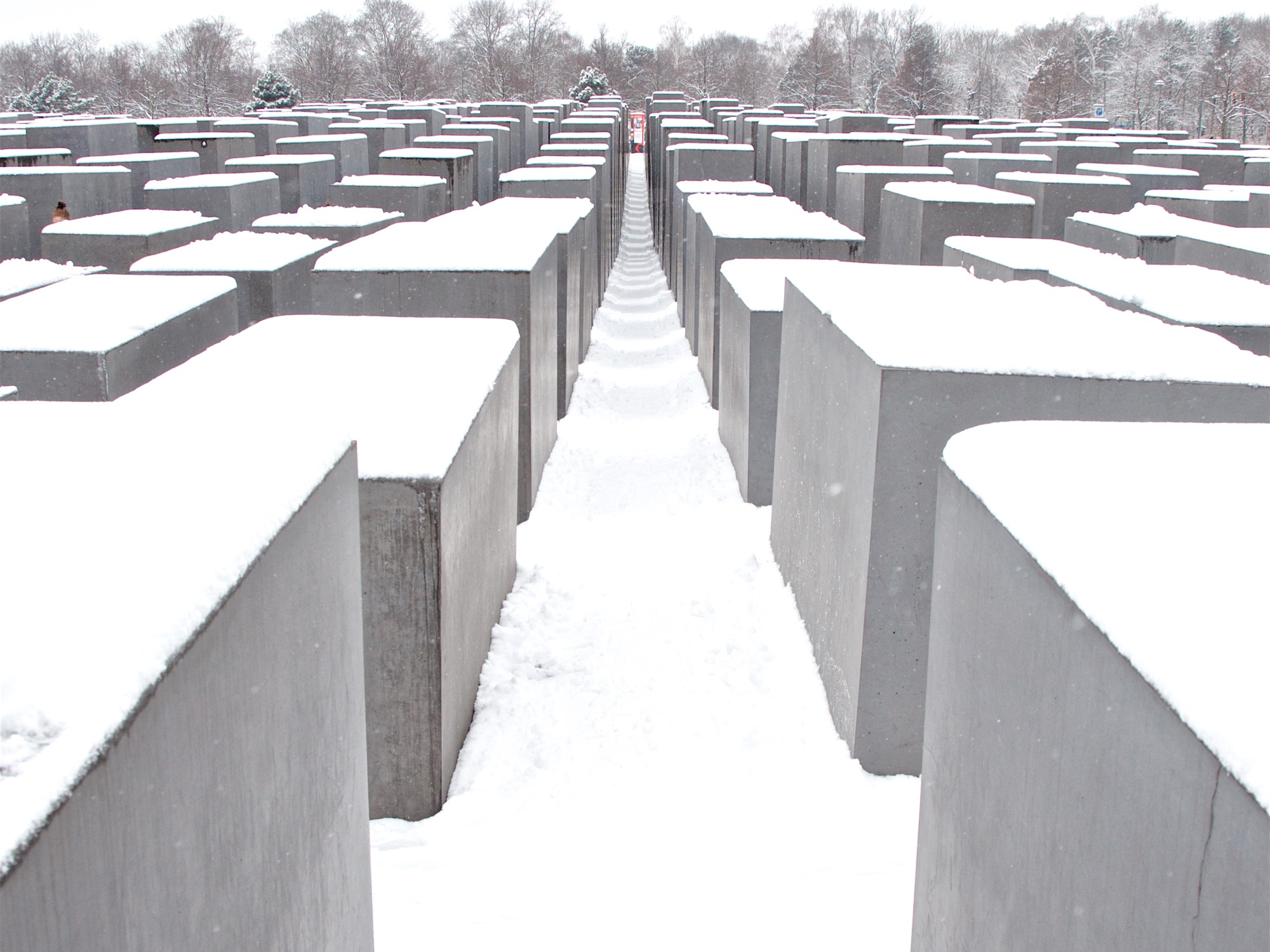 As our trip neared and we started following the weather patterns in Berlin we knew that it was going to be cold.  We debated wool coats over rain coats, and decided that, given our proximity to the month of April, it couldn’t really be THAT winter like in Berlin.  So we settled on packing layers just in case.  But today was a snowboot and thick scarf kind of snowy day that we did not anticipate.  When we left the hotel at 9am, it was full on snowing.  The sidewalks and roads had been sanded and salted, and people were wandering through the fluffy white stuff like it wasn’t even there.  Compared to yesterday it felt warmer, as the biting winter breeze had disappeared, so I was excited to be able to enjoy a little real white winter.  We started our walk down Friedrichstrasse in search of breakfast.  All the bakeries advertising fruhstuck were no longer where we remembered though.  So after 20 minutes of walking in circles we finally decided to start moving towards our first destination and hope be crossed paths with some place we could eat.  If we’re learned anything in our short time here in Germany is that German’s prize breakfast.  It is a significant portion of the day.  Every bakery, cafe and restaurant advertises it and hotels are judged by the quality of their breakfast option (we could have eaten here, but €12,00 per person for breakfast was too steep for me).  We were fortunate that only 1 block from our first stop we happened upon a small cafe.  We had one of the regular breakfast meals – scrambled eggs with bacon, a glass of orange juice, cup of coffee, and some rolls with jam.  It was the perfect way to start  the day.  It was also the perfect way to warm up – we were already freezing!

We continued out adventure 1 block further to the Memorial of the Murdered Jews of Europe.  Inside is a time line of what happened to the European Jews, where they were moved, in what quantities, and what they experienced.  This is just one more way that German’s have pledged to remember their past and honour the lost.  The exhibit underneath the memorial was very information (took about 45 minutes) and the memorial above was interesting.  I’m still unsure what the architecture is suppose to mean though – something to look into.  What I do know is that, if I could speak German, I would have been yelling at the dozens of teenagers who were running through the columns having a snowball fight and screaming.  Even inside it tells you that this is a place of remembrance and to please be quiet.  The kids were showing no respect for the site they were visiting, and it made me cringe.  Of course, the English speaking tour groups inside were busy sitting on benches waiting for their guides, and had just as little respect for what was happening there.  It leaves me to wonder how we help the next generation understand the significance of the events that happened in Germany over the last century, or anywhere in the world for that matter.

After we finished at the Memorial we walked along the snowy edge of the Tiergarten.  Originally our plan for this day involved renting bikes and exploring the town that way (including biking through Berlin’s equivalent to Central Park) – but when we saw the forecast for snow, we decided to experience Berlin via transit.  So we walked back through the Brandenburg Gate, which was lit up beautifully in the snow and begun our adventure on the S-bahn/U-bahn system.  The transit is so beautifully designed here and easy to navigate.  While you do have to pay for passes and could get caught, it is similar to our system in BC, where there is a certain degree of honour in the process (unlike NYC’s swiping system).  We had no problems at all working our way south to the Kreuzberg district – home of the largest Turkish Market outside of Turkey.  They had streets lined with fresh produce, spices, meats, kebabs, donairs, feta, olives (in more sizes, shapes and varieties than I knew existed!), dried fruits, sausages, fabrics and notions.  If you were someone looking to sample authentic turkish cuisine, this would be the second best place to do so (first being Turkey, obviously).

Post Turkish Market we headed east across the Spree to the East Side Art Gallery.  This is the longest connected remaining stretch of the Berlin Wall, now a home to street artists.  While there are some beautiful pieces done on the wall, there is a lot of less than wonderful street tagging that has been done to it as well, taking away from the beauty of the experience.  It’s amazing though to see something some ugly be turned into something so beautiful.  One artists said it really well (see photo).

After leaving the East Side Art Gallery we headed back North towards Alexanderplatz – a busy happening area, full of shopping and the famous TV Tower – the highest structure in Germany (and the EU I believe?)  We wandering in circles for a few minutes before getting oriented and starting our way across Museum Island.  By now my uggs were soaked through and through and i was carrying an extra couple pounds of water in them, that I could hear sloshing as I moved my way through the snow.  My feet had been wet for hours and I was starting to get tired.  But we had a few more stops and complaining about it wouldn’t help anything so we pressed on.  We stopped first at the Berliner Dom – a beautiful Cathedral on Museum Island.  We wanted to go in and check in out, but found the €7,00 per person cost a little more than we were willing to part with, so we settled for a picture of the outside.  We quickly crossed the bridge to visit Humboldt University, were I got myself a sweatshirt.  Did I mention Einstein worked there? (#ihearteinstein).  We then traced our steps back to Museum Island once again to Ray’s museum of choice – Pergamon – the most visited museum in Berlin.  It’s two big drawing features were the Pergamonalter, which is a huge roman alter that tells a Greek myth, and the Ishtar Gate of Babylon, as in the one built by King Nebuchadnezzar.  So that alone was worth the price of admission.  By the time we were done, the snow had picked up, our feet were wet, faces red and noses numb. It was time to seek solace in our hotel!  Course now I’m starving – time to say auf wiedersehen and head for dinner!