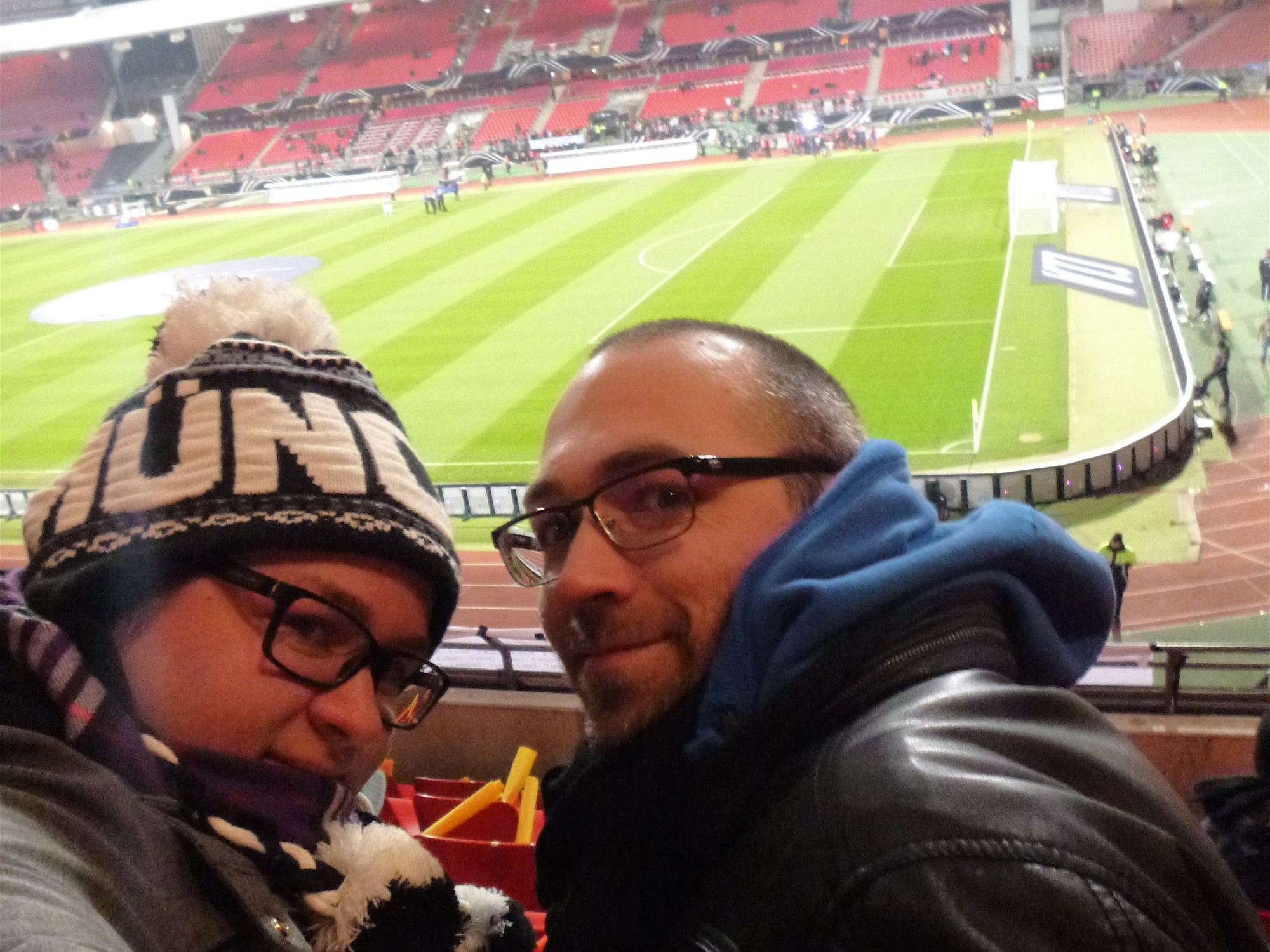 Tonight was the long awaited match between Germany and Kazakhstan.  We got to the game early – an hour and a half before it was scheduled to start, to hunt down a jersey and enjoy the ambiance – and in addition the game also started late.  Sitting in an outdoor theater in below-zero temperatures isn’t fun!

When we got to our seats, we saw a red piece of paper the size of a poster, all rolled up.  It was for us to be part of a giant German flag when the game was about to start.  We held up the paper for about a minute, and then everyone started crumpling the paper up and throwing it off the balcony into the lower level of seating.  I gave it my best shot, but probably landed the paper on somebody’s head.

We got to see the players do their warm ups and play around – their accuracy in passing is amazing.  We were a little to far away to recognize players by their faces, so I had to wait until the introductions to find out Ozil’s number.  The introductions are really funny – the announcer says the player’s first name, and then the crowd shouts their last name.  The same thing happens when a player scores a goal.

During the game, the rowdy section of the crowd was constantly singing, cheering, or starting the wave.  They have dozens of different songs they sing, and I couldn’t make out the words to any of them.  When the wave is almost approaching, everyone puts their hands out and does jazz hands, kind of like ripples before the wave.  If the play on the field looks promising, people start to stand up, which means that you need to stand if you want to see.  Then the play finishes, and everyone sits down.

The final score was 4-1 for Germany, which really is more generous to Kazakhstan than they deserved.  Germany controlled the ball for 80 to 90% of the game, had way more shots, and way more chances.  Germany scored three quick goals in the first half, and the Kazakhs didn’t have more than 4 passes in a row for the first 45 minutes.  The goals were on our side of the field, so we got to have a good view.

In the second half, Kazakhstan was very lucky.  They scored a goal when the German goalie decided to deke around 2 players and then fell down.  The Kazakh player blasted the ball into the empty net.  The crowd was very unhappy with the goalie, and yelled at him every time he touched the ball for the rest of the game.  On the other end, the other goalie made 4 or 5 amazing saves, and the Germans hit the post 4 times in a span of 10 minutes.  In the 90th minute, Germany got it’s last goal and a minute later time ran out.

It was an amazing experience, and one that I hope to have again sometime.  We bought a Germany soccer jersey so I am now ready for the World Cup next year.

Here are some photos from my little point and shoot camera, and a couple videos.  One is of the. Soccer youth removing the flag/seal from the middle of the field, and other of the German National Anthem.