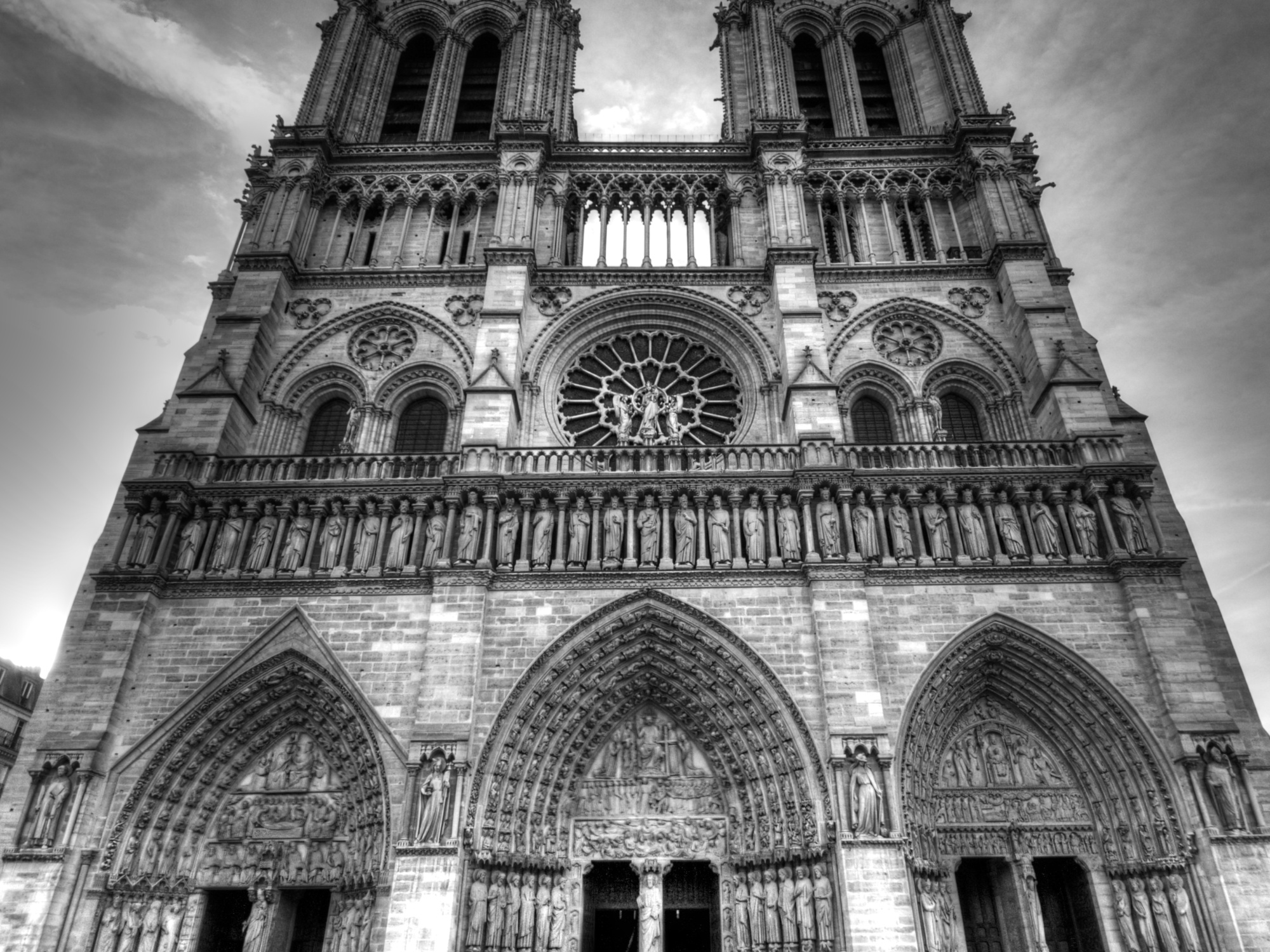 We started of our exploration of the heart of France, that is Ile de la Cite, admirably.  We left the hotel early to arrive at Notre Dame at 7:45am – which is when the internet said it opened.  Not knowing what to expect, we arrived in front (admist the construction celebrating Notre Dame’s 400th birthday) snapped some shots, and walking right in.  There was a small mass going on at the front (maybe 20-30 people), but us and a few other tourists were making the loop and observing.  We then looped the outside as well, reading the Rick Steves description of ND, learning what each face and carving represented meant.  We appreciated the statue Saint-Denis holding his own head.  As the Bishop of Paris in 250 AD, his head was chopped off.  Rumour is that he picked it up and walked 10km, finishing his sermon the whole way.  It was hard to appreciate the gargolyes without imagining them talking like Jason Alexander (thanks Disney for that) and when viewing the flying buttresses, Ray remarked that Notre Dame was much smaller than expected.  I mean “when Quaismodo was riding down the side of the building the people were much smaller, and it took him way longer than this would really take a person.”  Yes.  We did spent an unfair amount of time comparing the building to our Disney based perceptions.  This is what I get for showing Ray the movie 2 weeks before leaving.

The one thing I didn’t take into consideration was that the stairs to the top don’t open until 10:00am.  But of course it was only 8:30 by this point.  There wasn’t a line yet, and we didn’t want to stand there for 90 minutes, so we decided to start wandering.  We walked to Pont Neuf (new bridge – though actually the oldest in Paris).  We wandered down to the Seine level to take photos, and watched a couple police scuba divers searching the river for something.  Ray was convinced they were looking for a body, I said looking for evidence.  We will never really know.

On the wander back towards Notre Dame, we stopped at the earlier opening Sainte Chapelle – a church commissioned by King Louis IX – it has one of the largest collections of stained glass ever.  Because it is connected to the Palais du Justice, security is the tightest we’ve seen here in Paris thus far.  We entered the base of the chapel – small, with its low ceilings and I was instantly disappointed.  Of course at this time I had no idea there was an UPPER floor.  The windows were beautiful, each telling a story.  Ray spent time learning about the stories while I focused on photographing the room.  Of course, construction interferes with my beautiful shots (can’t be helped!)  I complained to Ray that we arrived at the wrong time – there is construction and maintenance EVERYWHERE in the city.  Ray then reminded me that with buildings this old, they will ALWAYS be under construction.  Point Ray.

By now it was 10:00 so we thought we would wander back to climb the bell towers, but by the time we returned the line up was down the street…really really far down the street.  We had no way to gauge the wait time and decided to return another day/night to attempt the climb.

Instead we continued our walk of the area.  This included:

Upon completion of our tour of the historic Paris center, we enjoyed a wonderful lunch before strolling over to the Louvre.  The Louvre was closed, so we thought maybe it would be a less busy time to attempt to photograph the pyramids and courtyards (not sure if this was true.  At the time we realized that the Louvre is ALWAYS busy, open or not, but after seeing it the next day, we realized this was definitely “quieter”.  We did get lots of pictures – and I’m happier with them than I expected (yay!)  Also got a lot of Ray – he said it looks like all we did was go to the Louvre so he could be goofy.  However, he was being SUPER serious and most of these photos were taken under protest.  But I LOVE them because I LOVE Ray’s goofy side.

Before leaving the Louvre for home, we walked past the Arc de Triomphe du Carrousel (a smaller Arc celebrating Napolean, which lines up perfectly with the bigger Arc, which you would reach by walking down the Champs-Elysses).  Another couple asked us to take their photo, in return they did the same for us.  Rarely do we get to be in the same photo (and after my NYC pick-pocketing experience, I’ve been on high alert when it comes to helping or accepting help from other tourists), so this was a nice!