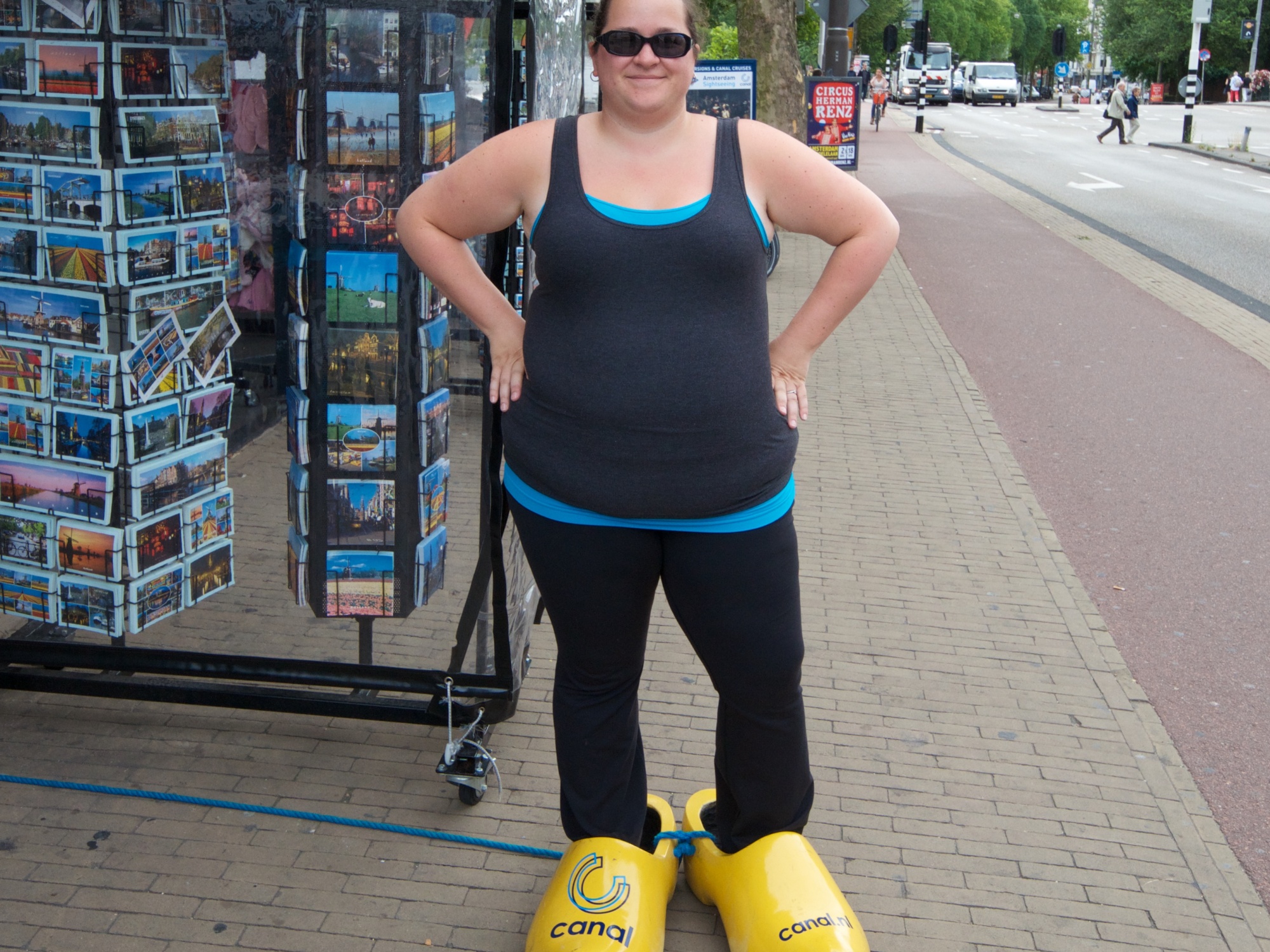 Cruising the Canals: When we were in Amsterdam 5 years ago my Opa took Ray and I on a cruise of the canals.  Amsterdam has 100km of canals – almost all of which are man-made.  The only natural body of water is the Amstel, running through the middle.  The Canals are complete with a series of locks, only used at night (3 nights of week), to flush out the canals and keep the water clean (or cleaner than it would be if they did nothing to move the water through the canals).  The Dutch are definitly masters of water management – good thing too, or the country would be flooded!  Cruising the canals is an enjoyable way to see the major sites of Amsterdam, learn about the history, check out the gabled houses, and overall just enjoy the scenery at a slow and relaxing pace.  We did our best to cover all the canal routes we could with our 24 hour pass.  If it’s your first time in Amsterdam I would definitly recommend it.  Yes, the boats are full of tourists (what else do you expect!), but it is a fun way to see the city.  We did a hop-on-hop-off boat, so we planned it strategically and saw as much as possible as well as used it to get to other sites throughout the city.  The tram was also a great way to great through the city, and truthfully, the main core (from Amsterdam Central at the North all the way down to the Museumplein at the South) can be walked in just over an hour.  It is easy to see from the water what a beautiful city Amsterdam is.  The canals are filled with houseboats, each with a permit (there are THOUSANDS of houseboats lining the canals), small local boats, and of course tour boats.  There are over a thousand bridges in the city, just adding to the charm.  The houses are so cute.  Back in the day the taxes were calculated based on the width of the house – so they are tall and deep, but narrow at the front.  Houses can be approximately 100 feet deep, with 4 – 6 stories.  They have hooks on the front to bring furniture up from the outside.  Many of these houses are so expensive now, that they have been turned into apartments, or are being occupied by banks, insurance agencies or consulates.

Wandering the Canals: When we weren’t cruising the canals, we were busy wandering along side them.  This isn’t something that needs to be planned – it just happens.  It is impossible to avoid them.  Locked to the canals are bikes.  Thousands and thousands of bikes.  Wandering the canals is so soothing and enjoyable – just keep your eyes open for the bikes.  Bikes are the dominant form of transportation in Amsterdam, and there are bike lanes on every street.  So it is important to watch where you are going.  But you could go to Amsterdam with no plan, and just spend an entire day walking across the bridges and along the various canals and never get bored. Well maybe you could.  But I’d be good.

Markets:  Amsterdam has a variety of markets to enjoy – and we explored three.  First we went to the Albert Cuyp Market.  The website says it was open from 9 – 5, but when we showed up at 9:30 it was mostly empty.  I was expecting some sort of market that would cater a little more to tourists, but instead it was more directed to locals.  The stands were complete with deodorant, flowers, hair spray, wigs, spices, kitchen gadget, bikes, fish, cheese, fruit, candy and clothes.  Anything you needed was there – though of course they are just getting set up as we walked through.  There is suppose to be 260 stalls, but we only saw about 50 as we strolled the length of the market.  It’s all in one row – making it easy to work through.  What we did get was to enjoy breakfast as we went (which was the plan).  Our first stop was for fresh Poffejtes (mmmm….) – it is AMAZING how fast they pros can poor, flip and serve these tiny little puffy pancakes.  Then we stopped at a stand for fresh squeezed OJ, and then finished at the fruit stand with a basket of raspberries.  Later on in the day we went to the floating flower market.  I was expecting to find flowers galore (and there were a few), but realized it is actually selling seeds and bulbs.  If we had a house with a garden, Ray would have purchased mass amounts of bulbs for tulips and lilies.  In between the garden supplies were tourist gems – such as my klompen slippers, magnets, wooden tulips, pens, delft materials, tshirts, wooden klompen (clogs), etc.  So flowers + souvenirs.  The market stalls themselves are actually on little mini floating barges.  Very fun.  But the COOLEST of the markets was the Flea Market near City Hall.  I don’t normally do flea markets – I associate them masses of used crap and I have no desire to sort though that.  But this Flea market was dozens and dozens of stalls of local artisans with hand made or unique items.  I was too busy shopping to take many photos here, but when I return I will definitly return and spend more time here.  So markets are fun, go and explore.

Street Sculptures:  We didn’t get to do all the sculpture walk, but Amsterdam is dedicated to public art, and there is a walk you can take to explore all the sculpture out and available for the public to enjoy.  Here are a few were saw near the Rijksmuseum.

Van Gogh Museum:  Ray and I are both huge fans of Van Gogh, and were excited to explore a museum dedicated to his life and work.  The museum was laid out so well – working the way through his life in chronological order.  The museum teaches all about his work, and focuses on his dedication to growing, learning, challenging himself and pushing boundaries.  It uses microscopes to investigate the layers of paint and explanations of the chemical composition of his materials.  Moving through the exhibitions, you can tell the museum is focused on his process.  It was fascinating to learn about how he grew, sought out learning opportunities, classes, teachers, and a professional learning network to develop his skills.  He had drawings and paintings of various styles.  Of course many of his famous works were there, but every piece was accompanied by explanations not just of the piece, but of what led to it.  The Van Gogh museum is a museum about how art is developed, not just the art itself.  Ray was particularly fascinated with it.  When he left he was vibrating with inspiration and couldn’t wait to bring everything he learned into his classroom this fall.  He brought a book home all about Van Gogh’s process and I suspect his grade 5/6 students will be walking in his footsteps shortly.  I was interested to learn that the blue irises he painted were originally purple (red paint has faded over time), and was underwhelmed by the sunflowers, but inspired by his field with the crows.  Looked at the texture of the paint alone allowed me to envision Van Gogh actually painting them.  If you love art, I would say this museum is a MUST.  I learned so much and I know that it was one of Ray’s highlights of the trip.

The Last Supper: By our last night in Amsterdam we were so tired of restaurant food, wanted to enjoy some Dutch favourites and have some quality time along the canals.  So we went to Albert Heijn and bought some Gouda, buns, beer, orange juice, vla, and whipped cream (for less than €10,00 – so our cheapest dinner all trip!)  We then took our meal to the park near our hotel, dangled our feet over the edge, and enjoyed our dinner, along with the local ducks.  It was absolutely wonderful and we wish we did this more during our trip.  I can guarantee future trips to Europe will have more meals along canals and rivers and in public parks.  The picnic is where it is at!

So there you go – a brief summary of our 2 days in Amsterdam.  Looking back, we really enjoyed our time there and definitly wish we could have had a few more days to explore.  Guess we will have to return!