I love the Museum of Natural History.  The first time I went to one it was in NYC.  I couldn’t understand why scientists could possibly want to go to a museum with “history” in the title (sorry historians!) – but then I entered in.  And I saw the natural world organized and unfolding.  I saw wonders I could only dream or read of, and everything started to make more sense.

Not all of our group was as equally enthused about London’s Museum of Natural History.  I can only assume one part because the name of the museum doesn’t inspire awe in scientists, as I had already learned, and another part pure exhaustion.  So when given the option between sleeping in, and leaving at 9:30 for the museum, only 6 students were willing to get out of bed. Lucky for me I got to spend my day with those awesome 6.  And we had fun.  We explored, we engaged, we ran from room to room, power-walking through the museum hoping to catch a small glimpse of everything before we had to leave to meet the other group for the London Eye and dinner.  And so Janey, Shelby, Harpreet, Harleen, Qudrat and Harsimran joined myself and Mr. Becker on our journey through time. We saw volcanoes, experienced an earthquake, walked next to and under giant fossils of dinosaurs, whales, giant crocodiles and bugs.  We saw jewels, and moon rocks and 500 million year old fossils – one of the first.  And this was cool.  Supercool.  But not nearly as cool as the Spirit Collection.

When I was researching the museum online, I came across a free tour they offered of what they called the “Spirit Collection.”  I didn’t know much about it, except that it contained specimens from Charles Darwin’s Voyage of the Beagle.  As a biologist, I couldn’t pass up the chance, and the rest of the group were interested in going as well.  We went to the front dead right away to ask about the tour, and we managed to get the only 8 tickets left for the day.  In addition, the tour was only done in groups of 8, so we managed to get a ‘private’ tour out of the deal.  After lunch we made way over to the far corner of the museum to meet our guide.  He then proceeded to take us on a 30 minute behind the scenes tour.  The BEST part of the museum that I didn’t know existed.  They have 7 floors, making up the majority of the museum, with rooms on end, filled with lockers and cabinets, filled with jars, filled with various plants and animals species.  Almost 80 MILLION specimens.  The sheer number was enough to blow my mind.  We only went through a couple rooms on 1 floor of the building.  We couldn’t open up the lockers, which were organized by phyla (I can only imagine how awesome this would be for a Bio 11 class when learning about taxonomy!), but could look at a sample of the jars they had placed out for the tours to see.  We then went into a larger room with huge tanks with steel lids and mini-cranes handing from the ceiling to remove these heavy heavy lids.  These containers held much larger organisms – elephants, gorillas etc.  I wanted to see inside desperately,  but respected this part of the museum as a working research facility.  They have a giant squid in full view as well as pieces of a colossal squid, and around the corner we could see large jars full of monkeys, armadillos, turtles, sharks, and more.  Scientists can sign these out like books for research and take them out of the jars and investigate them in the neighbouring room that looks like a morgue.  I wanted to spend days listening and learning and watching.  And I wanted to open and look inside every cupboard on all 7 floors, if only I was allowed.  And I wasn’t the only one geeking out.  This by far was the highlight of the day, and one of my highlights of the trip. 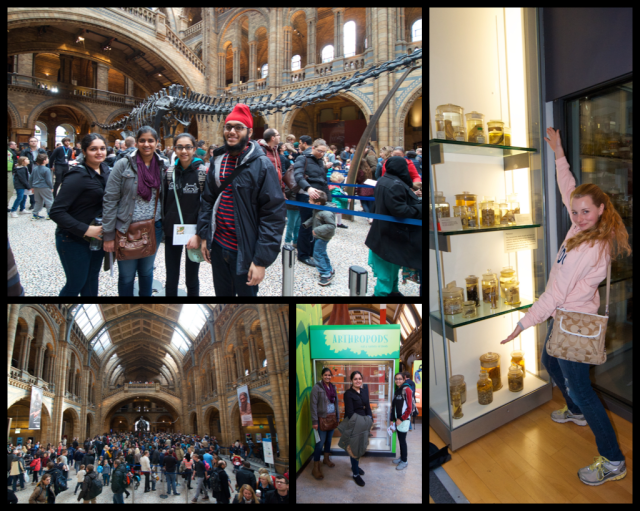 After our time at the Museum of Natural History we ran next door to the Science Museum.  Home to more recent scientific treasures such as the Apollo 10 command module, unused lunar excursion model, and the highlight for me, the original DNA model developed by Crick and Watson.  We had less than 1 hour to explore this museum, which was a shame.  It didn’t help that there was very few elevators and the museum was poorly laid out.  There was 5 floors, but most elevators didn’t connect more than 3 of them.  It was also skinny and narrow, which meant running back and forth from one end to another to find stairs – except those didn’t go up all 5 stories as well.  As a group we were getting frustrated that our limited time was being eaten up by poor museum planning.  And we almost missed the DNA model – we were lucky to find it on the way out the door.  We were so busy soaking in the science, that we were rushing to meet the other group at the Eye.  We sat on the tube with sore feet recalling all the cool things we had seen and lamenting the fact we just didn’t have more time.  So on behalf of me and my science nerd partners-in-crime – it was an outstanding day!