When I was 13 years old Apollo 13 came out.  This epic tale of the “successful failure” of 1970 changed by life.  I watched it and I was hooked.  I wanted nothing more than to be an astronaut.

I watched that movie over and over again, several times a week, some times every day.  When I reached the first 100 viewings, the VHS went dead, and my mom had to buy me a new one.  When I ran that one dead I finally bought the DVD.  And when I started teaching, I bought a second DVD to leave in my classroom.

At 13 my ceiling was covered in star constellations, and the moon dangled above my desk.  My bed was placed at just the right angle to watch the moon rise from it every night.  I had lamps, candles and blankets covered with stars, shelves with books, and duotangs filled with research about the space program and the universities that would help me get there.  This was the dream.  I had to work for NASA.  And so every day I would BEG my parents to take me to Florida, to visit the Cape.  To stand where “they” stood – the men and women brave enough to leave our planet.  It just never happened.

When I travel I’m usually pretty good at keeping my cool.  I’m a details person and I travel with large groups of students, who are always my priority.  But when our bus pulled into the NASA parking lot, keeping my cool wasn’t an option.  I was full-on geeking out.

There are 7 parking lots at NASA.  Named for the Mercury 7 astronauts.  In order.  Parking lot 1 being Alan Shepherd, 3 being John Glenn and so on.  I wasn’t even off the bus and i was vibrating in my seat.  The NASA globe greeted us, and at 9:00 am, at the opening of the park, they played the national anthem. While not “my” national anthem, it was a sign of respect and honour for all those who had served their country through expeditions into space.  I was so proud to see how instantly respectful out students were.  Then again, our Florida family here really are the best.

Our workshop started the best way possible – with a talk and Q&A with Astronaut Winston Scott.  Inspiring does not even begin to cover how I felt about hearing him speak.  The first thing that struck me was his confidence and his passion and excitement towards space flight and research.  I knew just listening to him that I never had the right temperament to be an astronaut.  I was born to teach, and there has never been a moment of regret on my path.  But knowing that I could never do what he did (and most could not display his level of confidence, calm and courage in the face of extreme circumstances such as his) just made my respect him that much more.  The second thing I love is that his Bachelor’s degree is in MUSIC.  That’s right.  MUSIC.  Then he went on to study engineering later.  And when the kids asked him about this, he said, “Why limit yourself to being just one thing?”  I think this is such beautiful advice.  Why indeed.  Captain Scott plays the trumpet in a NASA band, and then would fly to space.  Before that he flew “Top Gun” F-14 Tomcats for the Navy.  Now he teaches at a University and inspires others.  Why limit yourself.  He never did. 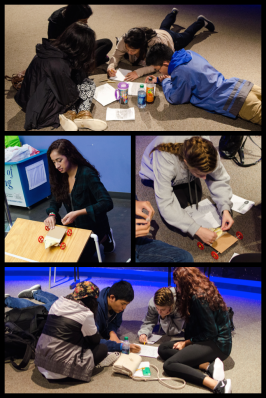 We then had a chance to participate in a Mars Rover Engineering Challenge.  I can promise future Physics students that you will be seeing this in my classroom – because it was amazing.  NASA’s understanding of the scientific method, planning, testing, adjusting, testing, working together, experimenting, testing again….is really unparalleled.  And more than just the activity itself, but watching our students work together so well, and so creatively was more than I could have asked for. Ms. Kenkel and Mr. Becker got super competitive about it, but in the end lost to Parm, Emily, Danilyn and Justin – who worked together so well, had an unparalleled attention to detail, and really showed the rest of us how it’s done.

There was a workshop on developments we use in our every day life because of the space garden and a stroll through the Rocket Garden.  And I got to walk along the gantry way that Neil and Buzz walked on their way to crawl into Columbia, on top of the Saturn V rocket.  The space mission to top all space missions.  The one that brought man to the moon.  And I walked up and down their path – with the bright orange bars exactly as I remembered them from every time I watched the moon launch over and over again in my teen years.  I closed my eyes and tried to image how it felt.  I’m pretty sure less frightening that it would have been for them – I wasn’t 500 feet above the ground next to the world’s biggest rocket – complete with rocket fuel (so powerful in fact you had to be at least 3 miles away at the time of launch).  The experience can’t be adequately described – though I’m sure from the ridiculous grin on my face in the photos, you may get the idea.

After the workshop we got in line for the bus to take us 5 miles away from the main complex to the Saturn V complex – the building out near the launch pad the holds a full Saturn V rocket – worlds largest – and the rocket that was used for the Apollo (moon) Program.  Again – after almost 20 years of being passionately in love with the thought of space travel, I cannot describe what it was like to stand there – right next to it.  To see a moon vehicle, Lunar exclusion module, command module, service module, and of course, to touch a moon rock (much smoother, denser, and darker than I expected, for the record).  Sadly, we were pressed for time, so we quickly loaded back the bus to return. 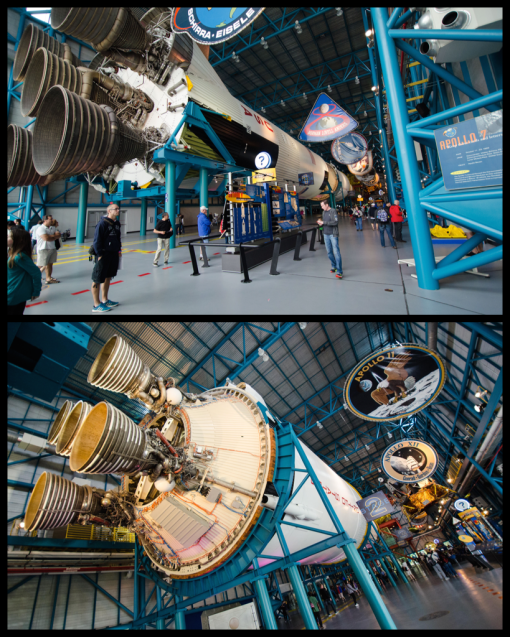 And then there was the Atlantis Building.  With the now-retired Atlantis Space Shuttle – one of three remaining shuttles that has been to space.  After a short movie on how the Space Shuttle came to be (which turns out to be a brilliant story in problem solving, persistence and the scientific method), the current arose to reveal Atlantis, it all it’s glory.  Goosebumps.  Ahhhh!  I was the nerd standing next to the screen, who ran out to meet it – and photograph it – before the rest of the tourists to catch up.  There was no end to my geek-out in sight!  The Atlantis building has a launch simulator that I had to miss (as I wanted time to go to the space shop! biggest in the world!!), the original prototype of the shuttle (i.e.: giant paper airplane), a space toilet, international space station model to crawl through, and of course – “emergency exits” – also known as the slide that gets you back down to the bottom floor.  NASA really does think of anything.

My only regret about this day is that I was unable to control time, to slow it down and give me the moments I needed to savour it all.  Guess I’ll just have to go back again soon.

Kennedy Space Center, I think this is the beginning of a beautiful friendship.