As I mentioned last time, 1/3 of  Holland is technically under sea level.  As you can imagine, this is a problem for many of the countries inhabitants, and of course the majority of their farm land needed to support them. So in the 1800’s the Dutch started to develop systems to help manage the water.  Moving it, and keeping it at bay.  Kinderdijk is an example of this – using Windmills to control water levels, and to use it effectively in farming.  However, Holland is possesses a lot of the coast line, as it borders the Atlantic Ocean on its west and north sides.  Because of this, there is an entire system dedicated to Water Management along the coasts – called the Deltaworks.  The project has multiple goals.  One is protection.  There have been many great floods in Holland due to storms, leading to many deaths and damage to infrastructure.  So they have built storm surge barriers to protect the land.  We saw one of these barriers – the Maeslant Storm Surge Barrier.  It is 2 arms, stored on land, but moved out over the ocean using a ball bearing joint (like a shoulder joint), that then sink to the bottom of the canal and protect the river, and in turn the harbor), preventing flooding and protecting part of Southwest Holland (in the province of Zeeland).  Each arm is as wide as the Eiffel tower is high, and they join together with a flexible v-shaped fit in order to ensure that the pressure of the water doesn’t force them to break. 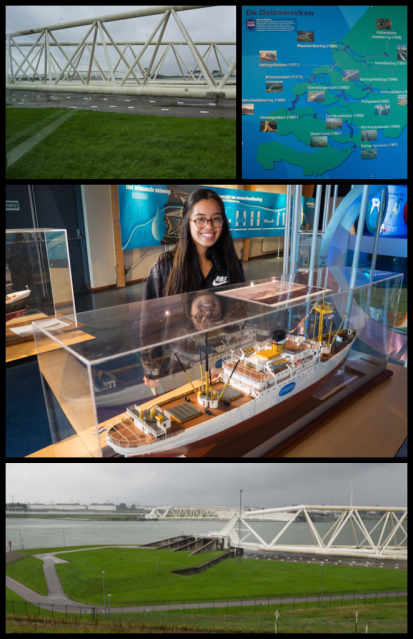 As well as the water management, the Deltaworks also use dams and wind turbines to generate clean energy off the coasts.  Water and Wind energy are used well in Holland, as well as solar and geothermal approaches to energy production.  Holland is an incredibly forward-thinking country when it comes to sustainable energy and protecting their environment.  I’m sure one of many reasons why it is so beautiful.
Given my Dutch heritage, it was hard for me to say goodbye to the Netherlands.  There is SO much to see (and eat), and I could easily have spent 2 weeks there showing the student so many more of my favourite places – but it was time to move on….to BELGIUM!
Belgium is another example of a country I wish I could have had more time for.  Upon entering I knew we only had < 48 hours to introduce the students to a little bit of Belgian life – and reflecting back, I’m pretty sure we accomplished that goal!  We only had one destination – Ieper.  Ieper is in the province of Flanders, and is known for being the area containing many battlefields from World War I (an area known as the Ypres Salient).  We were going to see many of these over the next 2 days, but first we needed to arrive and get to dinner!  The special of the region is Moules Frites (Mussels and Fries), and I was surprised how many kids went outside of their comfort zone to try it!  There was also a Flemish Beef Stew and Flemish Fish Stew that were savoured.  A great way to start our visit in Ieper!
After dinner some of the group headed back to the hotel to settle in.  Two brave souls went on a 5 km run with Mr. Becker (good work Pat and Ethan!), exploring the town wall and beautiful cobblestone streets.  And a small group came with Mr. Dewinetz and myself to visit the town square, the church, and of course, the Menin Gate, for the first time. 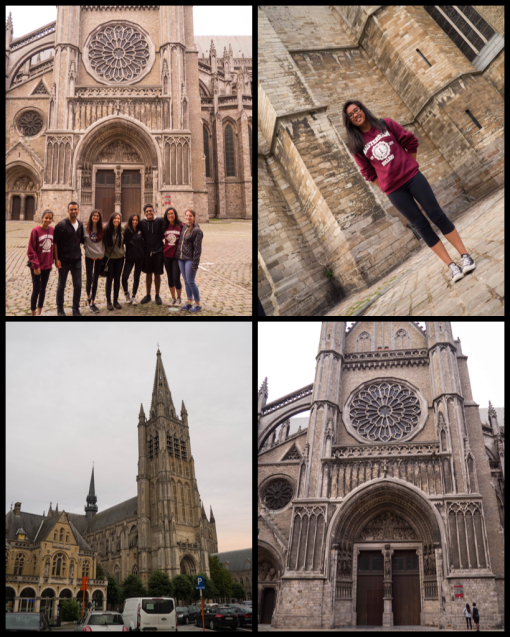 The Menin Gate is the staple of the town, and home to the Last Post Ceremony.  I’ll talk more about this in a future post.  The Menin Gate is a monument that honours those from the commonwealth who died during the war, but their bodies were not buried.  The lost soldiers.  There are 55,000 names on the gate.  Men.  Boys.  Many Canadian.  Seeing these names and touching the wall is such a moving and touching experience.  Trying to wrap your mind around how many people had to die to protect, preserve and ensure our freedom.  Sometimes we talk about war and forget about the names and faces.  They just become numbers and statistics.  But they aren’t.  They are people’s children, brothers, friends, husbands.  And the loss was great. 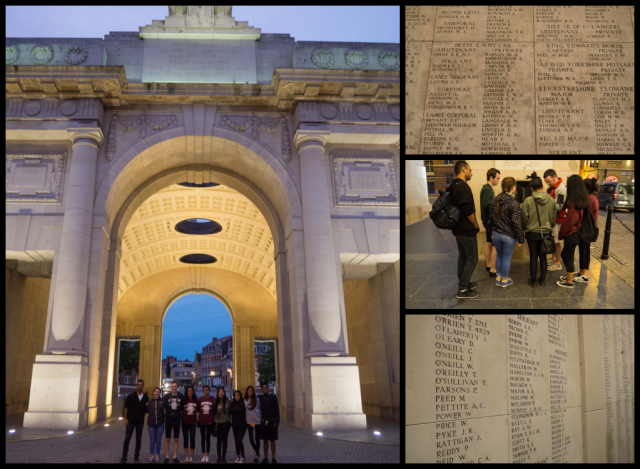 Absorbing this small town, with all it’s history and charm, was hard to do.  I heard a fair number of kids refer to this as if it was a fairy tale town.  It was so pretty to be true.  The gate was too surreal to process.  And I know one thing – 2 days was not close to enough.