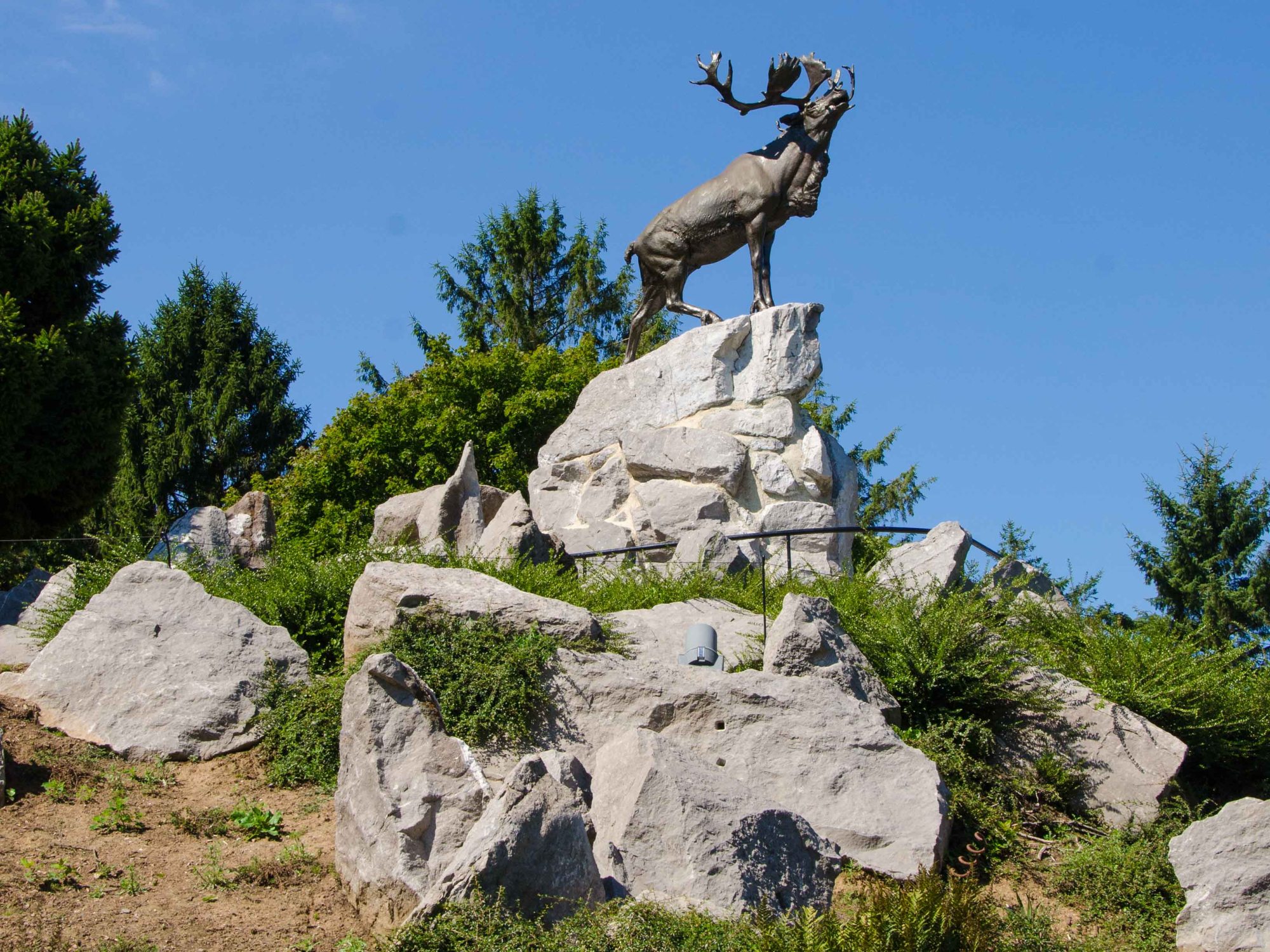 On day 5 of our trip we started our morning in Vimy Ridge (which I talked about here).  After Vimy and a lovely baguette lunch, we went to the second of two Canadian National Historic Sites located out side of our country – Beaumont-Hamel. The Beaumont-Hamel Newfoundland Memorial is a memorial site located in the North of France, around 1 hour away from Vimy Ridge.  It is dedicated to the Dominion of Newfoundland forces members killed during World War I.  It is both a preserved battlefield (complete with trenches and rollings fields showing the blasts of the past), a memorials (see the Caribou monument), and a cemetery (Y Ravine Cemetery).  This is the location that the Newfoundland Regiment made an unsuccessful attack in 1916 – the first day of the Battle of the Somme.  This was the Newfoundland Regiments first major engagement (back before they were part of Canada), and it lasted all of 20 minutes before the regiment was wiped out.  The land was purchased by Newfoundland in 1921 to create this memorial, and some of the Somme battlefield has been conserved in this 74 acre park.  There are 814 names honoured here on the memorial, plus the cemetery located as well. 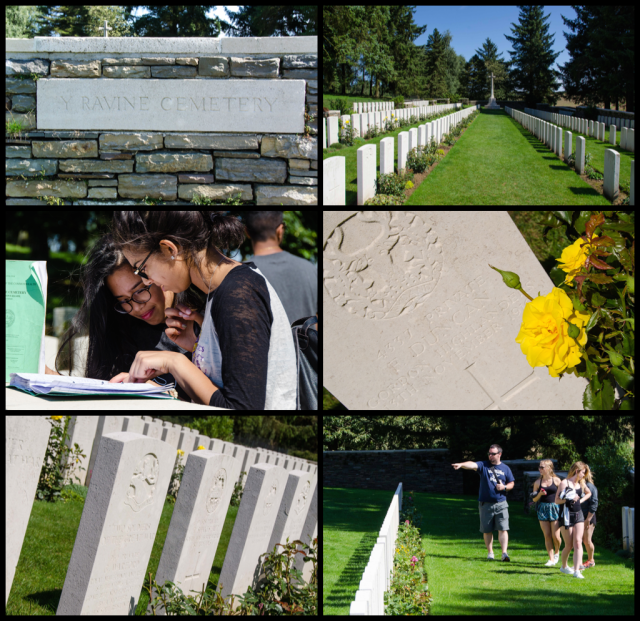 While standing in the battlefield, our guide, Steve, read us two war time poems, both of which really stuck with me.  Imagine looking out on to these fields, and hearing the following words:
Young Fellow My Lad, by Robert William Service
“Where are you going, Young Fellow My Lad,
On this glittering morn of May?”
“I’m going to join the Colours, Dad;
They’re looking for men, they say.”
“But you’re only a boy, Young Fellow My Lad;
You aren’t obliged to go.”
“I’m seventeen and a quarter, Dad,
And ever so strong, you know.”
“So you’re off to France, Young Fellow My Lad,
And you’re looking so fit and bright.”
“I’m terribly sorry to leave you, Dad,
But I feel that I’m doing right.”
“God bless you and keep you, Young Fellow My Lad,
You’re all of my life, you know.”
“Don’t worry. I’ll soon be back, dear Dad,
And I’m awfully proud to go.”
“Why don’t you write, Young Fellow My Lad?
I watch for the post each day;
And I miss you so, and I’m awfully sad,
And it’s months since you went away.
And I’ve had the fire in the parlour lit,
And I’m keeping it burning bright
Till my boy comes home; and here I sit
Into the quiet night.”
“What is the matter, Young Fellow My Lad?
No letter again to-day.
Why did the postman look so sad,
And sigh as he turned away?
I hear them tell that we’ve gained new ground,
But a terrible price we’ve paid:
God grant, my boy, that you’re safe and sound;
But oh I’m afraid, afraid.”
“They’ve told me the truth, Young Fellow My Lad:
You’ll never come back again:
(OH GOD! THE DREAMS AND THE DREAMS I’VE HAD,
AND THE HOPES I’VE NURSED IN VAIN!)
For you passed in the night, Young Fellow My Lad,
And you proved in the cruel test
Of the screaming shell and the battle hell
That my boy was one of the best.
“So you’ll live, you’ll live, Young Fellow My Lad,
In the gleam of the evening star,
In the wood-note wild and the laugh of the child,
In all sweet things that are.
And you’ll never die, my wonderful boy,
While life is noble and true;
For all our beauty and hope and joy
We will owe to our lads like you.”
*Other Poem was called “The Wire,” found here.
From here we went to the ADANAC Cemetery (Adanac = Canada backwards).  It was in this cemetery that we saw the grave of Victoria Cross winner James Richardson, of Chilliwack, BC.  He was a 20 year old Scottish Canadian, and Piper.  In 1916, during the First World War (Battle of Ancre Heights) his company came under intense fire.  Richardson got permission to play his company over the top, and walked up and down the wire playing his pipes, inspiring his company until the position was captured.  James was support to take back a wounded comrade and some prisoners, but realized he left his bagpipes.  He went back to get them, but was never seen again. These bagpipes were lost it, until discovered in 2002 in Scotland at a high school.  They have since been identified and returned to Canada, and can be found in the BC legislature as a reminder of his valour.
Next door to the Cemetery is a field.  And in this field, if you look hard enough, you can find remnants of World War I.  For most of us, it was tiny little metal balls called shrapnel.  A few of us found some pieces of little more unique.  Sonia was our shrapnel hunter extraordinaire – with her eagle eyes!  But most of the crew managed to find at least 1 souvenir of the war to bring home with them.  It’s crazy that it’s been 100 years, and yet evidence of the Great War is easily obtained in a farm field in Northern France.  Proof that the effects are war are not easily erased. 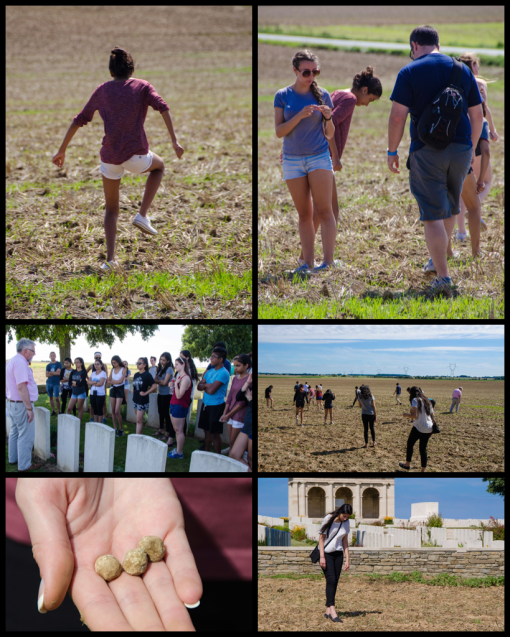