After my visit to the Great Sand Dunes I thought I was as far as you could get from civilization.  And then we went to Natural Bridges National Monument.  Natural Bridges is considered to be, according to almost every website I visited, the best dark sky viewing site in the United States.  One of the key ingredients to a dark sky viewing site, is isolation from high pollution.  This means you have to be in the middle of no where.  And this place definitly was.

The drive between the two sites was 6.5 hours, and we didn’t come across much on the way.  As we neared Natural Bridges we needed to stop for supplies, and we did so in the town of Blanding, Utah.  The first place we stopped once crossing into the state.  And there we found the “best” small town gem!!  A gas station, grocery store, A&W, bowling alley.  Yes.  All 4 of those things in one small store.  So we filled up the tank, used the rest room, bought some groceries, ordered a burger, but sadly, didn’t have time for bowling if we wanted to make sure to get to our campsite in time.  The campsite at Natural Bridges is no-reservations, and there were only 13 sites total available and we wanted to ensure we got one.  It was a one hour from Blanding to Natural Bridges.  If the campsite was full the website said there was a gravel field 20 minute out of the park that could be “parked in” – not sure how that would have worked with our tents, and there were no restrooms or water.  So we were hoping that we’d get a site – and we did!  That meant we had the luxury of clean vaulted toilets and a tap with some water of questionable cleanliness.  Better than the gravel field!  And the best part – inside the park. 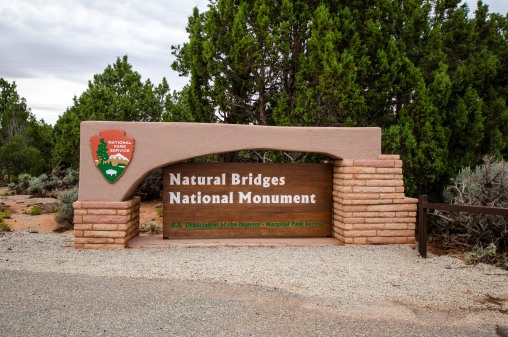 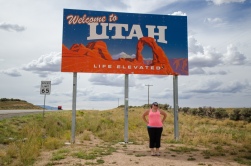 We had decided to stop here because it, like the Great Sand Dunes, was also a dark sky viewing site (more on that here).  They have an astronomy program and telescopes that can see some of the almost amazing things in our solar system – and the program only runs 2 days per month (the days they bring in the astronomer).  So we timed our itinerary just right for this program!  But before the sun was going to set, we wanted to explore.

Natural Bridges is a national monument (not yet national park status), sitting at 6500 on top of one of many mesas located in the southwest.  Ray and I took a drive through the one way look that brings you to the overlooks to see the three big naturally formed bridges: Kachina, Sipapu, and Owachomo.  Sipapu is the second largest natural bridge in the world (after Rainbow Bridge, in Arizona).  In Hopi mythology, “sipapu” is the gateway your soul travels through to the spirit world (things I learn by reading all the visitor guides).    You could see the layers of earth in the canyon walls, and the natural bridges that had been formed by centuries (millennia?) of erosion by water.  The water eroded the sandstone and formed 2 canyons, each with a little bit of that “red” colour (more than Yellowstone, but way less than Arches).  Watching the colour of the dirt change is one of the things I love about road trips.  In fact, I try to “borrow” a little bit from some of these sites, and have a few (or more) jars on my mantle: red, white, black, white and yellow (and a few shades in between).  The landscapes at Natural Bridges were drier than those we saw in Yellowstone or Colorado – definitly a desert climate – which made sense given daily high’s of up to 40 degrees.  Fortunately for us, we were there later in the summer, and in the day, and didn’t roast too much.  The view points were beautiful, and the drive around the look was about 25 minutes, though closer to an hour and a half with all the stops for photos, exploring, and of course, some jumping! 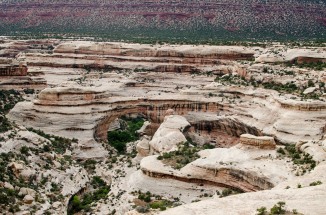 After dinner we headed to the visitor centre, keeping our fingers crossed for the
astronomy program we had driven all this way for.  However, we suspected we were o
ut of luck a few hours earlier when the clouds began to roll in, and sure enough, we (who were the ONLY people in attendance in the first place) were out of luck.  The range put on a video instead, but 10 minutes in I was falling asleep, and sleep seemed like a better use of time.  So sadly we didn’t get the mind-blowing dark sky viewing we hoped and dreamed of.  But travel is never a waste.

The following morning we got up early to pack up so that Ray and Meg could go hiking in the canyon.  We wanted to beat the heat (important here), and still had a long drive ahead of us that day.  Of course, as I am packing up the tent, I ran into a scorpion!!  Five points to him for stellar camouflage skills, and five points to me for not freaking out when i found him! 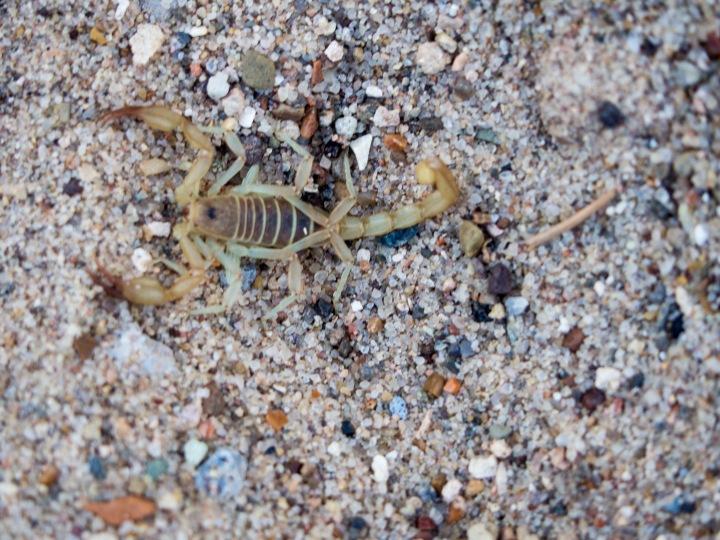 I dropped Ray and Meg off at their starting point and they hiked into the canyon, and from Sipapu Bridge to Kachina Bridge.  It is a series of ladders down into the canyon (where they found many cacti) and then a 4.0 km loop that ends up at the Kachina overlook. The trail is not maintained, so while I drove to pick them up from Kachina, and I could see them in the canyon below, it took a good 30 minutes for them to find the trail up the rocks and back to the top (I had to try and guide them from above).  They didn’t learn until later in our trip that the stacks of rocks they were seeing were called “Cairns” and marked the trail for them (this would have been useful!). 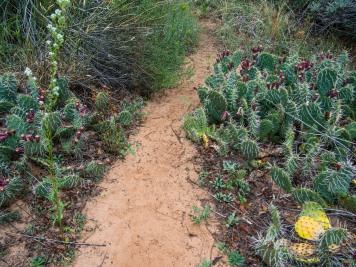 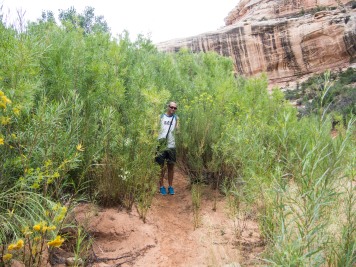 Even with the hurdle of finding their way out of the canyon, It was still less than 90 minutes for them to finish the hike.  Just long enough for me to take some awesome pictures, and be freaked out all alone in a parking lot when a strange older man came up to my window and wanted to make conversation.  Middle of nowhere, no one around, no cell phone reception, and me just claiming that my husband would be back any minute.  The guy wouldn’t stop leaning into my window and making small talk, and I didn’t quite know what to do to get him to leave me alone.  After about 15 minutes (and a series of mini-heart attacks), a motorhome drove into the parking lot.  Mom, dad, and a couple of kids popped out, all full of noise and enthusiasm.  I used it as an excuse to get out of the car, and go take some photos, and basically followed the family down to the look out and stayed next to them.  The stranger, who technically had done nothing wrong, but definitly gave me the creepy vibe, said he better be off, and got in his car and drove away.  The family keep me company a little while, and then went to have a snack in their motorhome.  They were in the parking lot enjoying their food when I finally spotted my husband in the canyon below.  In the time it took them to get back up and see me, I had seen other cars pass in and out of the lot.  And the stranger never returned.  But Ray did – and we loaded up, stopped in to visit the third bridge (Owachomo) for one last photo, and then hit the road.  Next top – Moab!