I am a rule follower.  Remember this as I tell you my story.

When we arrive at a new National Park, I almost always start at the visitor centre.  This is how I learn about the ecosystem.  When I was in university I fell in love with Ecology, and each National Park is a unique and beautiful ecosystem.  Thriving because of the connection between the abiotic (air, rocks, soil, waer) and the biotic (microorganisms, plants, animals).  In order to appreciate it and protect it, it helps to spend a few minutes educating yourself.  Also helps to figure out what to see, where to go, and how to get the most out of your visit.  So when we arrived at Arches, we stopped at the visitor centre.  We watched the short film, stared at the map, walked through the exhibits.  We read brochures, park guides, and about 45 signs saying the same thing “Don’t Break the Crust!” 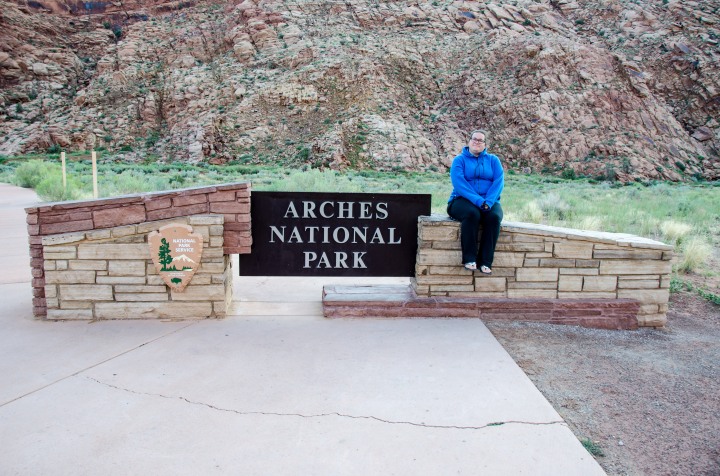 Arches has one way in and one way back.  There is a campground at the very end of the park, but it’s a 45 minute drive from the road, and not the most practical place to set up shop for us, given that we also planned a visit to Canyonlands, and needed access to groceries.  So we stayed at a nice little campground 4 minutes from the entrance, with shaded awnings and a pool.  I was worried when planning this leg of the trip, because Moab is known for having very hot temperatures, and very little shade (desert and all), and I don’t fair well in the heat.  So we thought the pool would be a smart choice.  Turned out, we had some sun, but also an insane rain storm.  So I was grateful for arriving in time for, what I would call, the best weather.  As we drove into the park we stopped to see many of the “big” sites.  Balanced Rock (with its 0.5 km loop around), the Courthouse, Windows, Turret Arch, Double O Arch, and a few others.  The red earth of Arches was fascinating.  I had never seen anything to compare.  There were some trails to hike among the arches and along the red dirt, staining my shoes red.  We thought we would save the “big” site – the delicate arch – for another morning. 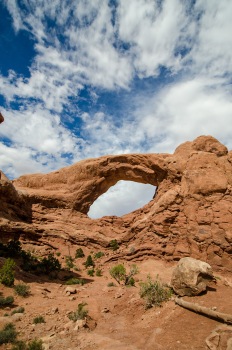 The first morning we woke up in Moab was an early one.  I wanted a sunrise so badly.  Ray had a 9:00 AM appointment to go hiking in the “Fiery Furnace,” a hike only allowed with a range guide.  But the sunrise was much earlier than that.  So at 5:30 AM we arrived at the Turret Arch to photograph the glorious yellow sun as it rose over the red earth.  At least that was what I hoped I would be doing.  Instead I got a temporarily purple-grey cloud cover for 5 minutes before the lighting began in the distance and running around with a metal tripod stopped feeling like a good idea. 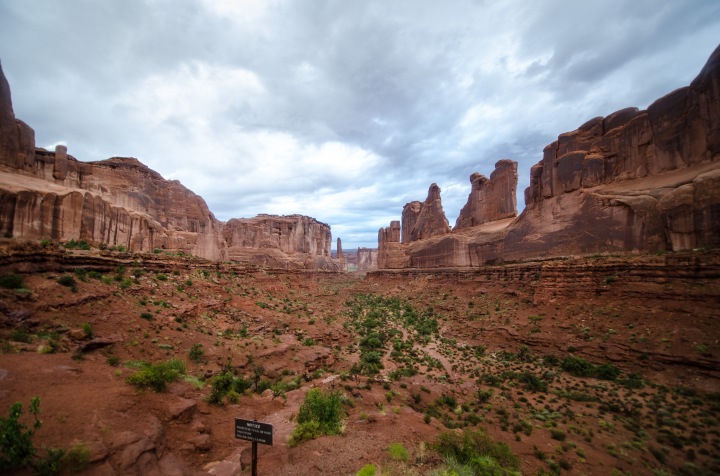 We retreated to the car just as the storm began, and took a short nap in the front seat before moving on to meet up with Ranger Dick at the Fiery Furance.  The next 3 hours Ray was off on his adventure, and I was off to shoot photos.  The rain had subsided and I had a list of places to shoot, but no sooner had Ray disappeared into the tall rock formations of the Fiery Furnace, the skies opened up, and released the flood gates.  The down pour was one of the more intense rains I have ever experienced.  I pulled over at one point because the windshield wipers couldn’t keep up and I couldn’t anticipate the sharp turns.  Waterfalls formed over arches and cliff edges, and rivers of red ran down the sides of the road.  I tried to step outside for a moment to take a few photos and video, but within 5 seconds of standing out of the car, I was drenched head to toe.  Lighting hit the ground nearby, and I felt the earth shake from under me, and decided inside the car was better than out. 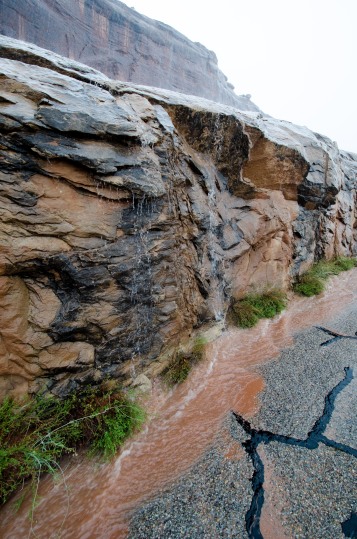 My camera lens had a few screws loose and was falling apart, so I abandoned my plan in favour of a trip to town to find a repair option.  It didn’t pan out, but I did wander through a few shops.  When I parked my car on the side of the road and steps out, it was into a few inches of water.  So after my errands I ran back to camp to get dry clothes and shoes for me, Ray and Meg – assuming that their hike must have destroyed them.  I mean, I was drenched, and it had only been 45 minutes.

Eventually I started the drive back into the park, and back to the fiery furnace – about 30 so minutes down the one way road.  When arriving the rains had stopped, and I had some time to take photos.  The area is surrounded by fences, trying to keep the tourists in a small area, and out of the ecosystem.  Because here is the thing – tourists, can you hear me? STAY OFF THE DAMN CRUST!  The biological crust is a LIVING cover to the desert landscape.  It is made of cyanobacteria, lichens, moss, algae, fungi and bacteria, all working together.  The sustain the life of the ecosystem.  Cyanobacteria are very old, and help turn carbon dioxide into oxygen – essential for any ecosystem.  They have been helping form Arches for millions of years.  When wet, like on a rainy day like today, the cyanobacteria can move through the soil, binding together rocks and soil to help create stability that protects the land from wind and erosion, and stores nutrients and water to keep the ecosystem healthy.  I know, not the sexiest of topics, but important for the rest of the animals and plants that call this ecosystem home.  But here’s the problem – it just looks like first. It’s got a little bit of a crunch, like the surface of the sand on a beach after begins to dry out post-storm.  You can’t see it.  It can’t hurt you.  So people just don’t care.  They hop the fences and walk all over it, trying to get the right picture of the beautiful rocks in the distance.  But if they keep doing it, they risk destroyed the park.  WHY?  WHY?  See, some of these rules are there because they just make sense.  It’s a National Park.  We all play a roll in protecting it.  And that means we need to follow the rules.  An unwritten contract between us and the earth, to protect it.  Then again, if we aren’t doing a very good job holding up our end of the bargain it seems.  Anything for a photo?  Somehow I think priorities need to be re-examined here.

I had just psyched myself up to start brawling with the ideas trampling on the earth when Ray’s tour group returned.  I had made some peanut butter sandwiches in the trunk of the car, and he was famished.  He spent the next 30 minutes telling me stories of “Ranger Dick” – his new hero – and the 3 hour hike through Fiery Furnace.  Oh – and apparently they didn’t even notice the rain…. 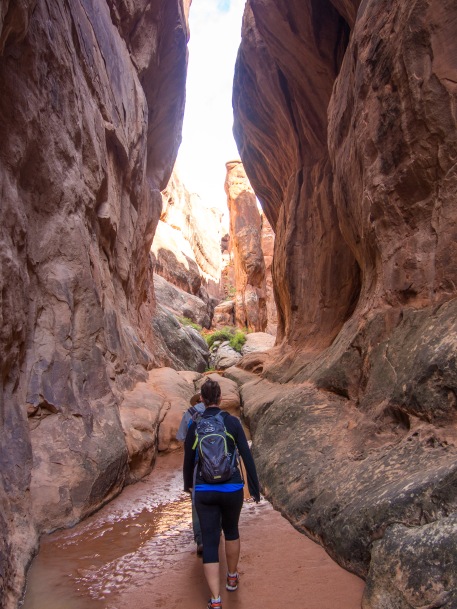 Once re-nourished we enjoyed a 3.5 km mini-hike (well, mini for him, real-person length for me) to the landscape arch – down a CRUST-FREE trail.  Oh, and when it said “stay on the trail,” I obliged. 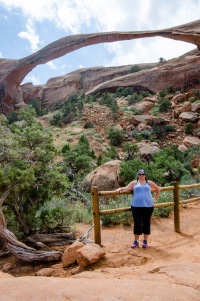 All was left was to visit Delicate Arch.  The BIG one.  The iconic Arches image, like Old Faithful in Yellowstone and Half Dome in Yosemite, and the caldera of Volcanoes National Park.  Except, the rain had flooded the road.  There was still rain and lighting in the distance, and we had plans to get to Canyonlands that afternoon, so we had to let it go.  That happens sometimes.  Just gives me an excuse to return one day in the future.

So my plea to you:  be one of the good guys.  Respect the parks.  Don’t feed the animals.  Don’t pollute the waters.  Don’t take down the neighbouring tree to light your campfire.  And please, don’t break the crust!