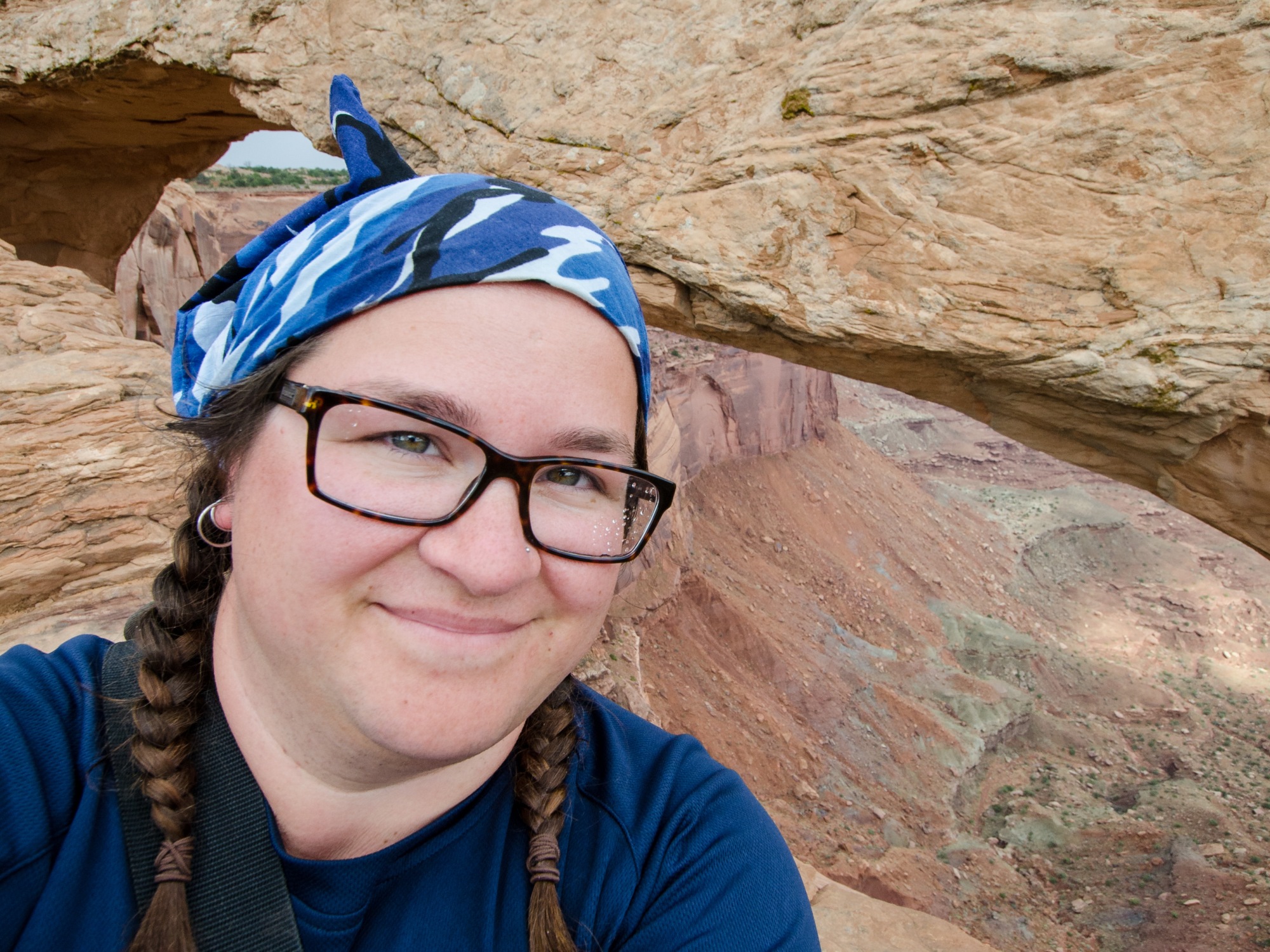 Southern Utah has a concentration of National Parks, Monuments and Recreation Areas.  Within a 5 hour circle you can see over half a dozen, and if your driving errs on the side of swift, you may even be able to reach the Grand Canyon.  When planning a road trip, once you reach southern Utah the instinct it “Let’s see them all!!”  But it doesn’t always work out that way (though, side note, super jealous of The Greatest American Road Trip – check out there journey to visit all 59 National Parks in 52 weeks. Sounds like the dream job to me!!)  Needless to say, we decided that if we stayed in Moab we could visit Arches (our main goal) and would have some time to make the trip to Canyonlands National Park as well.

Canyonlands is located a 32 mile drive from Moab.  Is is a series of Mesas, Buttes and Canyons carved by erosion due to the Colorado and Green Rivers.  The two rivers, and two respective canyons make for beautiful scenery, and the oxbow bend, scene from neighbouring Dead Horse State Park, is beautiful.  There are 3 main “districts” to visit within the park, each with it’s own unique geography (and time required to see them).  We only visited Islands in the Sky (see park map here).  There was a choice upon visiting – drive through and get a quick look at everything once, or visit a single district, but have time for a hike.  Ray chose the hike.

When we entered the park, just as we would with any other park, we started at the visitor centre.  A quick survey or the few available displays (and quick purchase of a magnet of course), and then time to chat with the ranger about possible hikes.  We hadn’t spent much time researching Canyonlands, so advice seemed the best route.  She suggested a couple short jaunts, and then a medium sized loop that she said would take “3 – 4 hours.”  In Ray and Meg terms, this meant, 2 hours, because of course, hiking is a sprint.  So we drove 10 minutes down the road to the parking lot so they could begin the hike.  You can see from the photo below, Ray opted for the 5. 8 mile Neck Spring Trail, while I preferred the 0.1 mile walk to the Shafer Canyon Viewpoint.  And so we split up for a little bit.

Ray and Meg headed into the canyon, with a goal to take in a little scenery, while proving they could beat all possible posted times for this “short” hike.  This meant visiting with bunnies, red rocks, great views, and a rainbow or two. 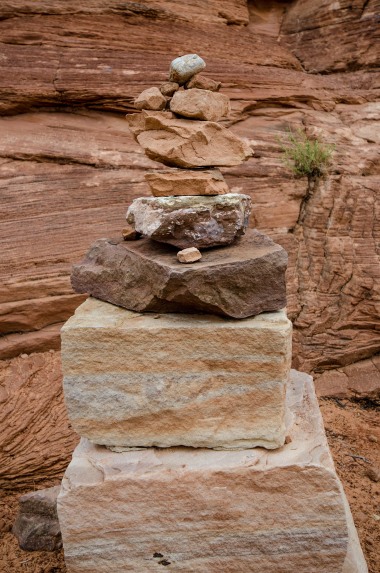 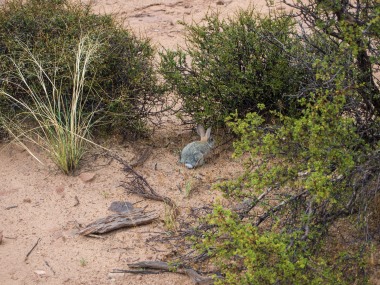 First I headed to the overlook to get one view in the canyon.  I have no real experience with large canyons, so I though this was very impressive! 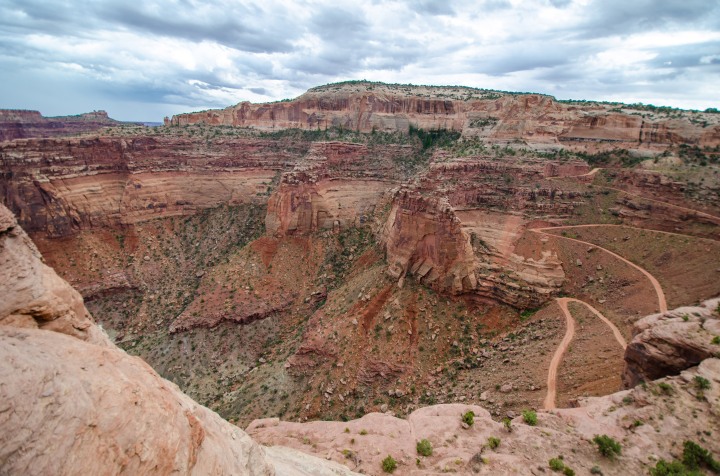 But there was only one site I was REALLY interested in – and that was the Mesa Arch.  The Mesa Arch is best known for the site of the perfect sunrise shot.  At 4:00 AM dozens (or dozens or dozens) of photographers hike out from the parking lot (about 15 minutes in) to claim the “perfect” spot for the “perfect” shot of the sunrising through the arch.  I was not willing to get up at 3 AM to claim a spot just to stand there for 2 more hours.  Not this trip anyway.  So I settled for the day time view, which was absolutely spectacular . When I got there I was the only one at the arch.  I didn’t even think that was possible.  Within minutes a dozens of others arrived, and my moment of peace with the arch, and the canyon below, was done.  But the few moments we got to share together alone were absolutely magical.  And I must say, this canyon view was even more impressive than the first.  Everything was getting better and better. 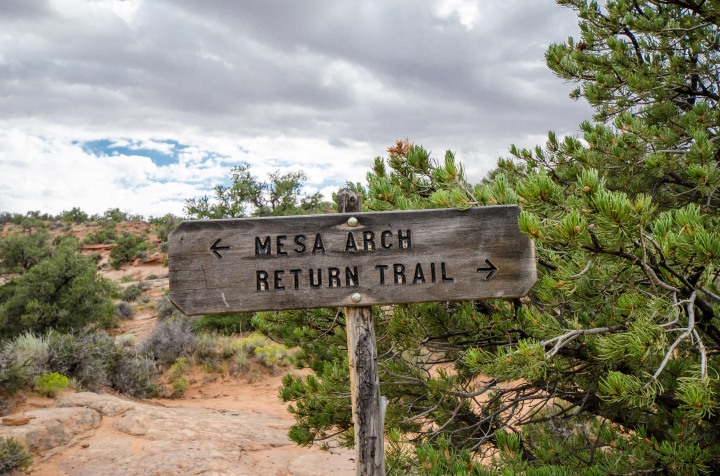 Now, with limited time before Ray and Meg were going to return from their super-speed hike, I turned around the left Canyonlands.  About 10-15 minutes before the entrance (or past the exit, depending on which way you view it) is a turn off to head to Dead Horse State Park.  Dead Horse has views into the same Canyons from the same rivers, but for some reason isn’t considered a part of the park (not sure why).  I wasn’t thrilled to part with another $10 to enter (state parks are not included in a National Parks Pass), but I REALLY wanted to get a picture of the oxbow bend in the Colorado River.  But, as luck has it some times, the minute I relinquished the $10 bill, the floodgates opened, and the storm began. I was already in the park, so I thought I would drive to the Dead Horse Point Overlook anyway.  I mean, I’m from British Columbia.  A little rain doesn’t bother me.  But sadly, the cloud, mist, and haze it created didn’t make for great pictures.  Sigh.  Dead Horse – I will be back. 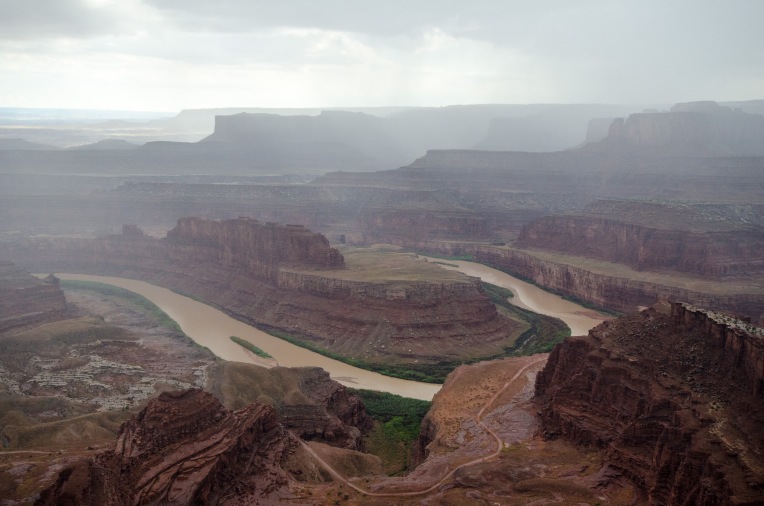 I rushed back to Canyonlands, just in time to pick up Ray and Meg from their hike.  It was now after, and we had plans to get to the Green River Overlook in time for sunset.  We stopped at the Mesa Arch parking lot on the way.  I didn’t think Ray should miss out on this wondrous site.  So he RAN the 30 minute trail, and was back 10 minutes later (yes, he is naturally athletic.  yes, I am jealous).  We continued to the end of the line – the Green River Overlook.  By now we were ready for dinner, and had a little time before sunset.  Ray began making an amazing salad in the back of the car, while I went to the edge to shoot some pictures of the canyon before the light started to fade.  Of course, the clouds were beginning to part – but it was too late to try returning to Dead Horse, and we had committed to Green River, where we were told we would find the best sunsets in the park.  And I LOVE a good sunset.  We then sat on the sidewalk and enjoyed our bounty, and watched the sky slowly begin to fade. 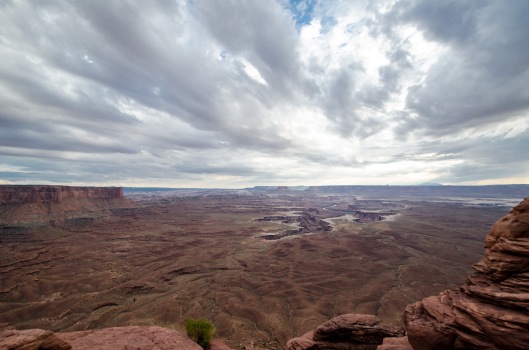 As most of us know, as the seasons change, the position of the sunset changes as well.  Sadly this meant that the sun was preparing to disappear in an area less ideal for photographs.  So we walked through the dirt (no there was no warning about going off trail or signs related to biological crust anywhere), and then across, around, and over some large rock formations, to the edge of a cliff that was far from the parking lot.  I set up my tripod, moving closer to the cliffs edge to see around the bend to get my photo.  Ray sat FAR away from the cliff’s edge (not a fan of heights), and every 30 seconds reminded me to back up and watch where I was moving.  He wasn’t a fan of me “risking” so much for a photo.  I wasn’t worried.  I was too busy drinking in the oranges, pinks and blues that came as the sky changed colour while slowly slipping away behind the mountains.  I kept shooting, ignoring Ray’s pleas to begin to walk back before it was too dark to see and we were walking on slick rocks, near the edge of a canyon, with no light.  Seriously – he goes hiking in the back country with bacon, bears and no map, and I’m the one being risky?  I think the photos speak for themselves – totally worth it! 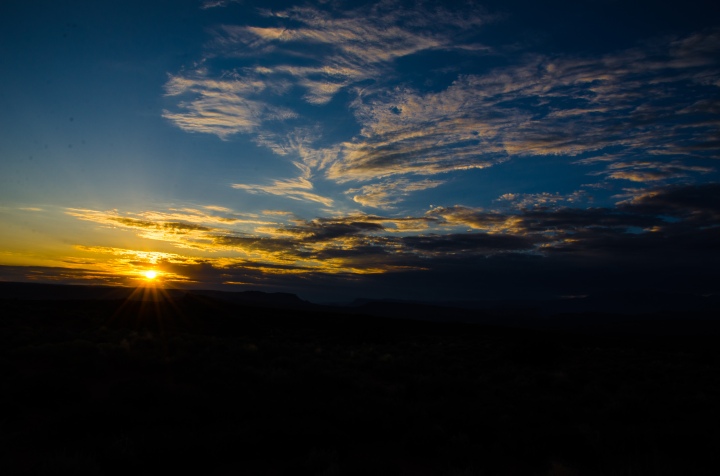 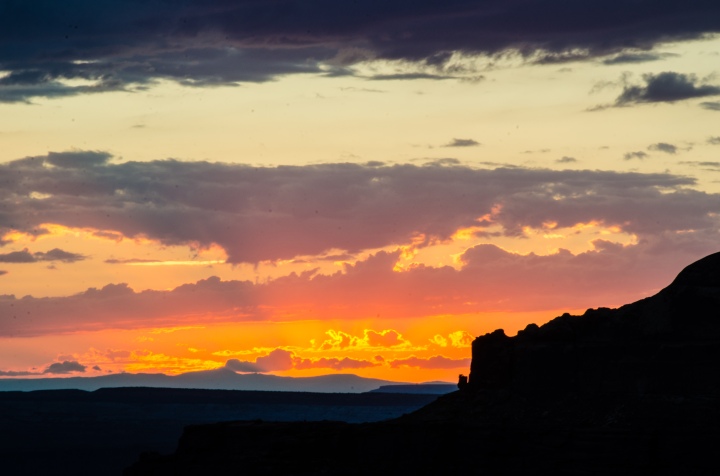 We were in the car and visitor centre bound before the sun had completely disappeared, and now we were in a rush.  One of the draws to visiting Canyonlands was that it was (yet another) DARK SKY SITE!!  This was becoming a trend.  After getting clouded out of the astronomy program at Natural Bridges, I wasn’t going to miss this opportunity.  Except that the clouds WOULD NOT GO AWAY!!  So even though we made it on time, after 30 minutes of waiting and talking, they decided to cancel the program.  I was so disappointed!!  Once again, foiled by the weather.  But as we all (should) know, you can’t control the weather.  And, once again, I added yet another location to my “I will return” list (note: while picture below advertises rain, shine, cloudy or clear, when it is cloudy they offer you a movie indoors.  And we were way to tired to force ourselves to stay away for that).  And so, with handful of disappointment, we began our 32 mile trek back to camp, where we treated ourselves to one more “Polygamy Porter” (the Utah special – only 4% in their beer in Utah, and a lot of amusing names) before getting a good nights sleep, and preparing to say farewell to Utah.