When we decided to dead to a European destination for Christmas, we picked Rome.  We didn’t pick Rome for any special reason.  There was no big market or Christmas celebration or history of a spectacular Christmas event that was worth going for.  We just picked somewhere that we hadn’t been, and had enough to see or do that we could wander for a week without getting bored nor without feeling pressure to see and do something every day.  Rome seemed to fit the bill.

While I have a reputation of being a planner, I think I did the least amount of planning for our 7 nights in Rome.  I booked us an apartment that seemed relatively central so we could walk everywhere, and I booked a tour of the Vatican on Christmas Eve.  That was it.  This lack of planning wasn’t really intentional – but happened as a result of a busy fall semester, and lack of time.  But I might just admit it was one of the best things to ever happen to us.  Our week in Rome is filled with wandering.  A lot of wandering.  Throw in espresso, good food, and a dozen or so servings of gelato, and I think we did Rome the right way – the Italian way.

We booked an apartment through AirBnB – my first time using the service, but definitly not my last.  Rita, the lady we rented from, was amazing.  She picked us up from the airport, dropped us off at the apartment, already stocked with coffee and breakfast food, a 3 minute walk from the Campo di’ Fiori.  A comfortable bed, good wifi, great location and small kitchen were exactly what we wanted and needed.  The neighbourhood we were in was a wonderful one.  In one direction, the Campo di’ Fiori market – a food and flower market that runs every morning, in the other direction, a short walk over the Tiber river, the neighbourhood of Trastevere, a local neighbourhood with great food and few tourists. 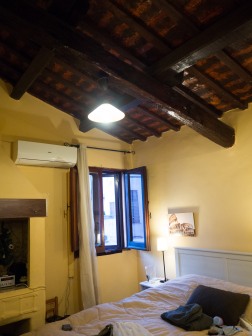 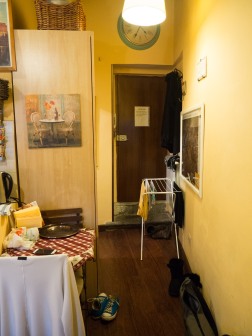 Every day we would venture out – sometimes with purpose, sometimes with no real plan at all – and would walk past the same sites.  In fact, these sites started to make this little neighbourhood feel like home.  We developed a routine, visiting them every day.

Gelato was the one thing I was really excited about what getting ready for Rome – and I wasn’t disappointed.  At the end of our street there was a place called Punto Gelato.  It had good reviews and sold in season authentic gelato, so we knew we hit something good.  There are few things you can look for when judging a gelato place.  For example, the gelato shouldn’t look like giant clouds escaping from their containers.  The lemon should be white, the pistachio pale, and the strawberry shouldn’t be sold in December because that is out of season.  Instead it seemed the fruits favoured kiwi, pear and blood orange.  Kiwi became my new favourite flavour, followed by pear – I am craving them both just writing this now.  Ray was more into the tiramisu, nutella and creamy chocolate options – also excellent.  We went twice a day for gelato – and to Punto Gelato made up over half of those visits.  The evening stroll for gelato is one of the things I miss most about Italy. 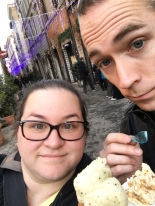 The first night we were in Rome we ate at a restaurant right around the corner from us called Dar Sergio.  As far as Ray is concerned, there is no restaurant that has ever compared since.  We were exhausted and starving, and still jet lagged, and walked in the door at 6:30 to an empty house and a few weird stares from the waitress.  We sat down and only then realized that we were too early for dinner by Italian standards.  Between 7:00 and 7:15 some locals wandered in and we were no longer alone.  We had a plate of buffalo mozzarella and prosciutto, and then carbonara – the dish of Rome.  Months later Ray is at home still trying to make it “like the one we had at Dar Sergio’s.” Not sure I’ll ever hear that end of it.  We also enjoyed other local dishes and drinks in the Campo Square, such as tiramisu, cannelloni, limoncello, bellini, gnocchi and of course, porchetta sandwiches.  It was a rarity to hear us complain about food in Rome (minus an incident on Christmas day that I’d rather forget.  Advice: never eat at a restaurant that pays someone to stand out front and convince you to eat at the restaurant). 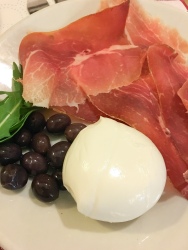 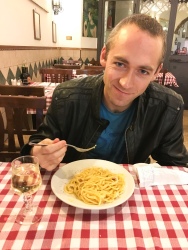 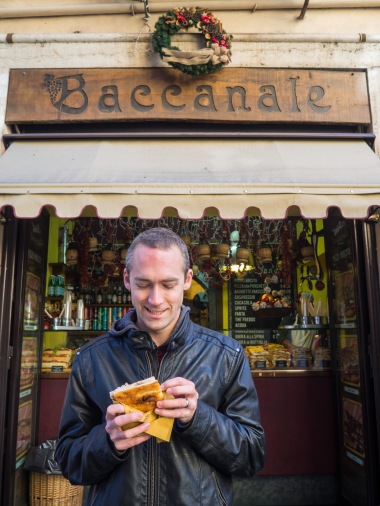 The local market is a beautiful one, rich in flowers, food, leather, oils, spices, cheese, pasta and more.  Some of it is there more for the tourists, such as the stand selling t-shirts, and other stands there for the locals.  We ended up buying our Bialetti Moka at a stand there, only to find it cheaper in a coffee shop off the beaten path 3 days later, but that can happen.  Overall, the sights, sounds, smells and colours of the market made is a feast on the senses to walk through every day. 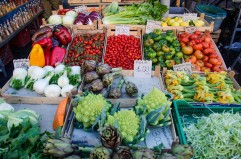 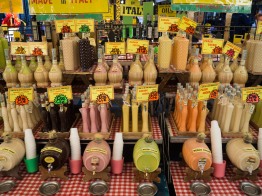 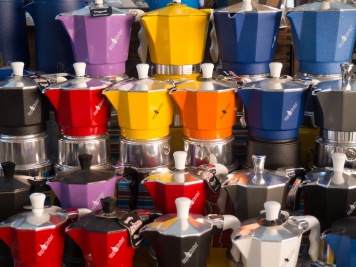 In the first three days we would be wandering through Rome and constantly walk past this square filled with Random Roman ruins.  This square – Largo Argentina – we learned is the site where Julius Caesar was murdered many many years ago.  On the second or third lap past this square we finally stopped to read a plaque detailing it’s history.  It was at this point in time that we saw a cat.  Ray went running while yelling “kitty” and I stayed behind to read the signage.  And then I saw the sign.  CAT SANCTUARY.  Roman Ruins.  Julius Caesar. Cat Sanctuary.  Took me a few minutes to wrap my head around the sheer awesomeness of it all.  The sanctuary was closed at this time (it was Christmas day), so we came back the next day, and day after, and day after that, so Ray could re-visit 100 of his new found friends.  Inside there are dozens of dozens of cats, some with 3 legs, many malnourished, all wandering about for strangers to come in and visit.  Those that are healthy enough are free to roam outside in the ruins and bask in the Roman sunshine.  Trying to convince Ray to leave this place was no easy feat.  Needless to say, this is one of his favourite places in Rome, maybe even, the world. 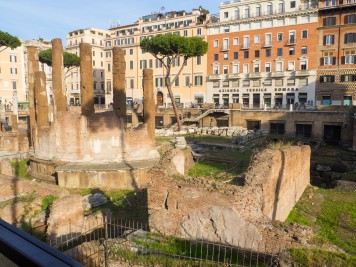 So there it is – our little neighbourhood of Rome.  While we visited many spectacular sites when in Rome, it was the 1.5 km radius around us that was our favourite.  I mean, Pasta, Gelato and Cats – what more do you need for an A+ travel adventure?

One thought on “Campo di’ Fiori is my home”