There is something magical about exploring a city at night.  Especially in Europe, with old buildings and architectural wonders, they have a special glow amidst the warm lighting and haunting shadows.  For some reason I feel safer wandering the streets at night in the ancient cities, more so than at home, and it’s become one of my favourite things to do when travelling.  So though I had hurt my heel, and ever step was an excruciating one, there was no preventing me from taking the round trip stroll to the Colosseum and back (though I had already done this walk in the day light), in order to ensure I could see it light up by night.

The Colosseum really is a wonder.  I highly doubt it would have shone so lovely in ancient Rome, unless they were lighting candles in each of its many windows after the sun set, though I’m sure it could have been it necessary.  Late at night there are only a few stray tourists, most doing the stroll as we were.  We took a full circle around the Colosseum, crossing paths with half a dozen people, 1 first date picnic, and 1 couple enjoying some “private” time a little more publicly than they were aware of.  If you go to the right of the metro stop there are stairs that bring you up to the street above, with a lovely view of the Colosseum.  If you are lucky enough to have a white angle lens, it’s a great location to get the whole thing in one shot (those a few trees obscured the view just a little).  Front the front of the Colosseum you can see the Christmas tree, which, though the picture gives you an illusion of it being large, was actually much smaller than it appears.  Walking home we passed the tree in one of the main squares, and some windows that had made Christmas fashionable, with Christmas tree themed dresses.  This was about the limit of Christmas decorations seen throughout the city, with the exception of all the nativity scenes found inside the front doors of most churches (and there are MANY churches), and some lights strung through some of the narrower streets. 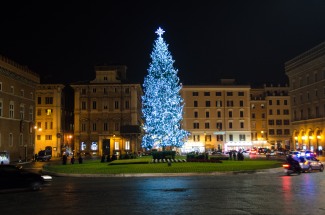 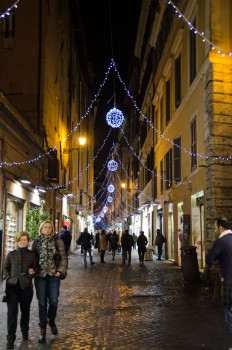 While the stroll out to the Colosseum was well worth it, the neighbourhood near our apartment was one of those with the narrow streets and the strung lights that I loved so much.  Even just walking to the end of the street and back was fun.  We saw couples strolling arm and arm in their leather or down-filled jacket and fashionable boots, while children collected gelato, chestnuts roasted on a grill (no open fire), and friends and neighbours greeted each other in Italian, “Buon Natale.”  And what’s not to love about that? 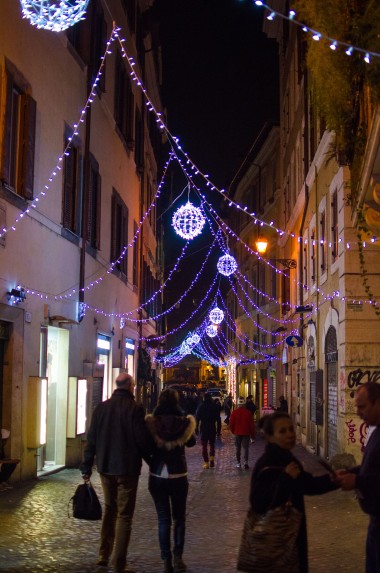