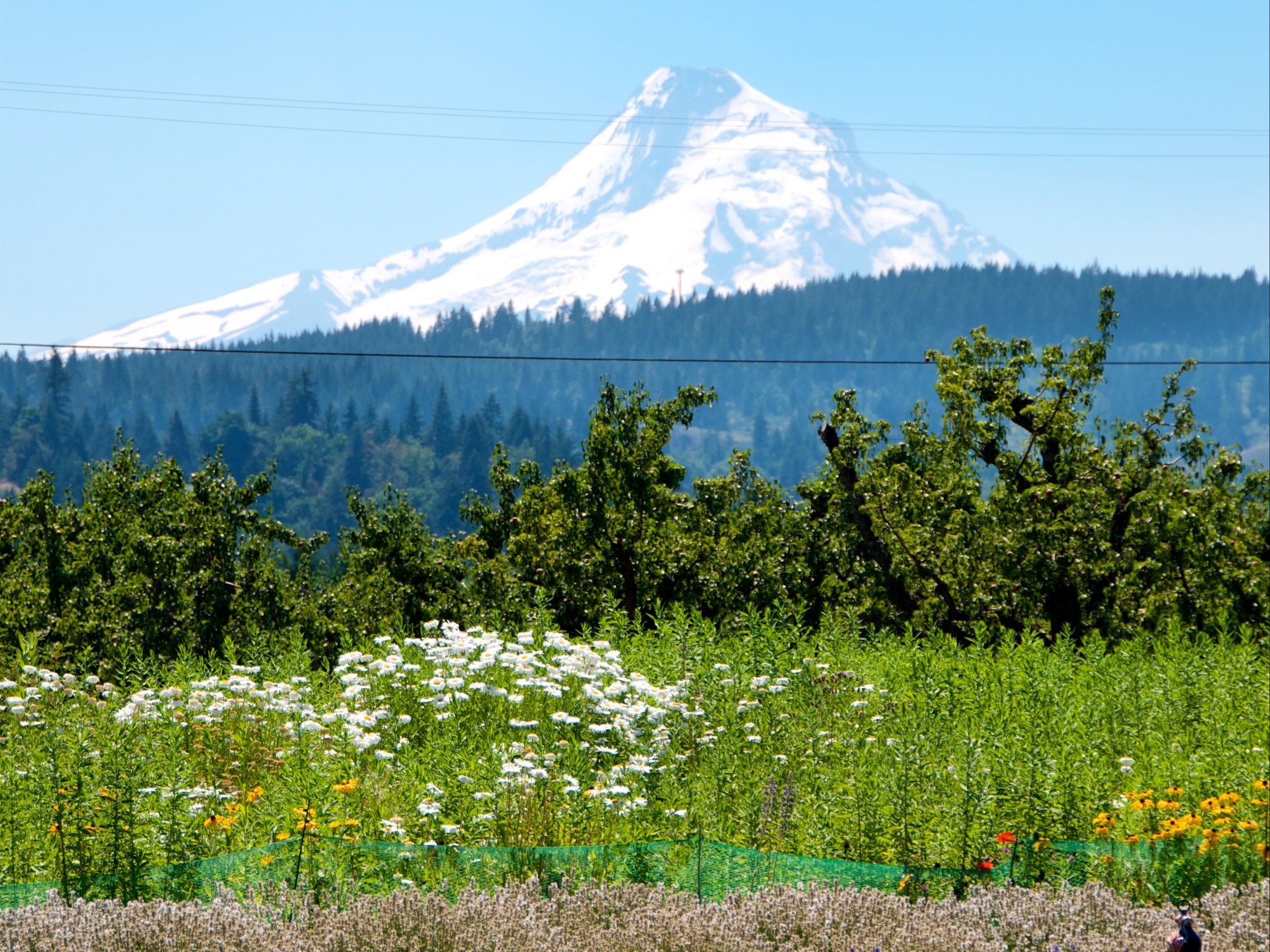 I don’t plan too many things spontaneously, but the opportunity arose to plan a quick girls getaway.  I had 48 hours to pick a destination and hit the road.  While the options were numerous, I settled on a visit to Oregon.  Because Oregon is always a great choice.

My sister-in-law and I ventured south – headed straight for Hood River, a town about 45 minutes East of Portland, in the shadow of Mt. Hood, next to the Columbia River, surrounded by waterfalls, orchards and vineyards.  Even on paper without photos that sounds perfect, right?  We stopped only for margaritas on our way down the I5, and then headed into the town to settled in for the first 3 nights, at the Best Western Hood Inn.  A great hotel with a great location right on the river.  After settling in we went into downtown Hood River, and had dinner at the 6th Street Bistro – where I had the best salad I’d ever had (and fell in love with Pears!)  The weather was WARM (like 35+ degrees Celsius) for our time in Hood River, but that didn’t stop us from getting outside.  It just meant more cold drinks were in order. 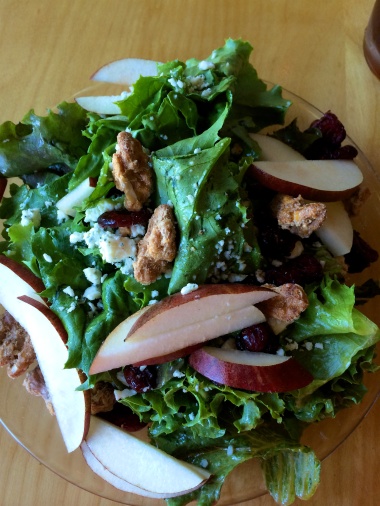 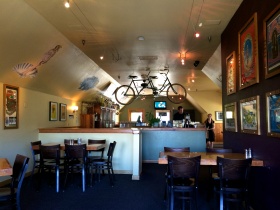 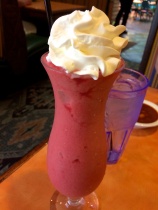 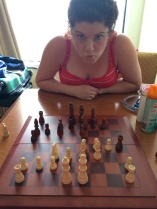 After a good nights sleep we awoke to our first full day – and started by driving the Hood River Fruit Loop. Hood River is next to the beautiful snow-capped Mt. Hood. There is a route you can take that is rich in orchards, fresh flowers, lavender, organic ciders, wine, and charm.  This is 35 mile loop is a day well spent!

After a quick drive up to a viewpoint to take in Mt. Hood in all it’s glory, we started the fruit loop with the visit to the Gorge White house, for our first wine tasting of the day.  They have U-pick wildflower fields, that were absolutely beautiful.  I wish we could have taken a handful with us, but they would have died in the heat of the day, and it wasn’t like we have a vase in our hotel room.  Also, you can’t take fresh cut flowers back into Canada.  But on the other hand, not being able to purchase them allowed us to enjoy them that much more.  As well as a winery in the front, they had cider tasting in a building around back, and I bought some amazing jam and chardonnay vinaigrette that disappeared all too quickly once we got home. 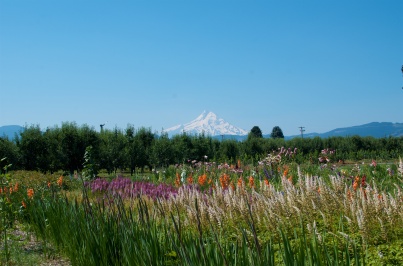 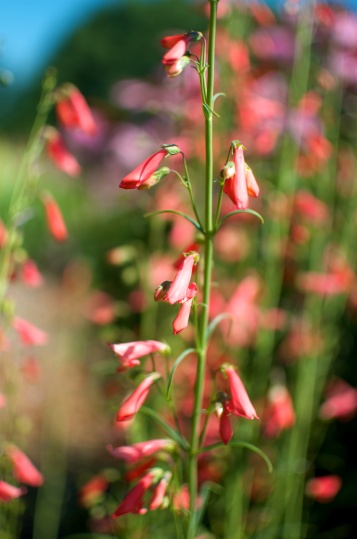 Our second stop was the Mt. Hood Winery.  The view from the big windows inside the winery were lovely, and the wine wasn’t too bad either (it was early, but by now even the air conditioning was a bonus).  Of course after this winery, my tasting ended.  I’m not really a big wine drinker, and we were only a few miles into the fruit loop, and someone needed to be the driver.  So I left the sampling to Vanessa for the next 30 miles, and I enjoyed the viewed and food. 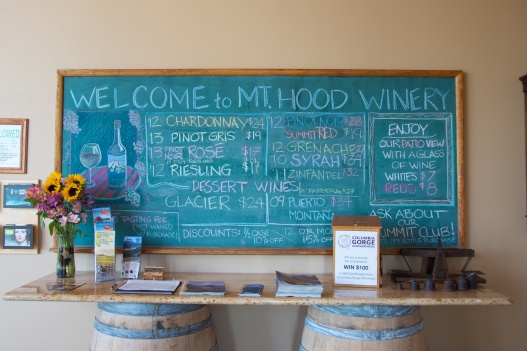 Next up were Fox-tail Ciders and Wy’East Vineyards.  Vanessa found some of her favourite wine from Wy’East.  At this point our plan for the day involved some glass blowing.  So we went off the beaten path to this place that I found online.  Their glass pieces were beautiful (including some tumblers, and an apple and pear I really wanted).  But the person who does their classes wasn’t in, and they couldn’t get us in that day.  They scheduled us in for the following morning, so we left empty handed, but looking forward to glass blowing in our future.  Sadly, we got a call the following morning saying the instructor was sick.  Sadly – we didn’t get to do any glass blowing here (we made up for it once we got to Lincoln City though).  Bonus – they had a cat.  So Vanessa called this a win. 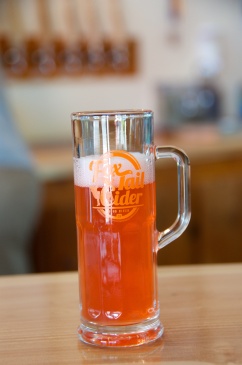 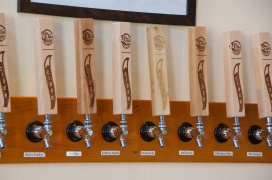 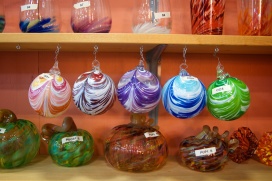 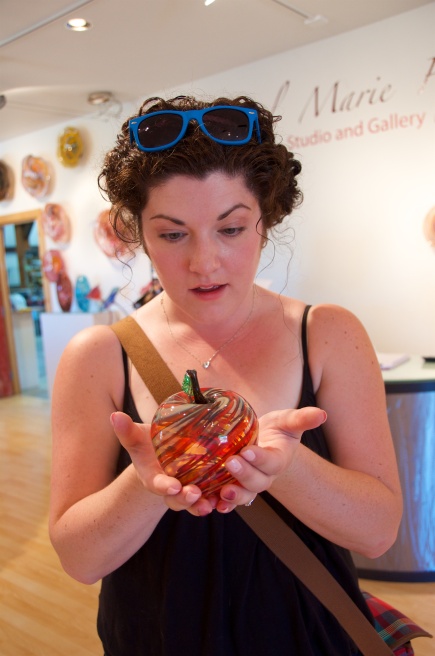 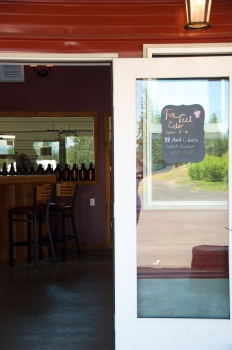 My favourite stop on the loop was found after a small deviation off the main road, the Hood River Lavender Farm.  I had never been a fan of lavender, until this time.  The views, the colours, the smells – all intoxicating.  They had more types of lavender than I even knew existed!! 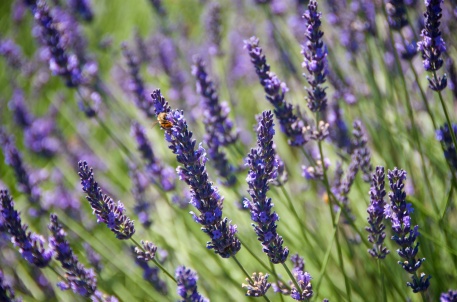 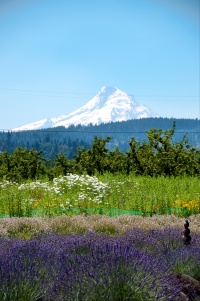 By now we had visited 2 cideries and 3 wineries, and food was needed.  This was our stop at Packer’s Orchard.  Except they didn’t have food as much as pie, ice cream and cookies.  So Ice Cream and cookies for lunch it was.  We hoped to pass some “real” food shortly after – but it never really happened.  So advice to future travellers, take a sandwich with you (or make plans accordingly – I’m sure there was food to find – we just didn’t know where). 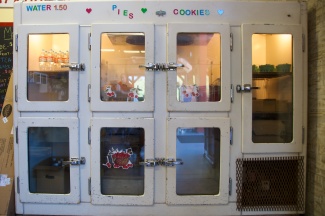 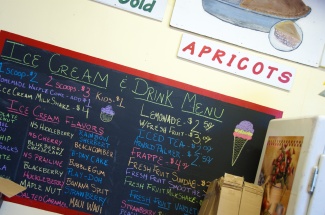 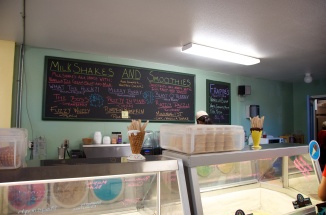 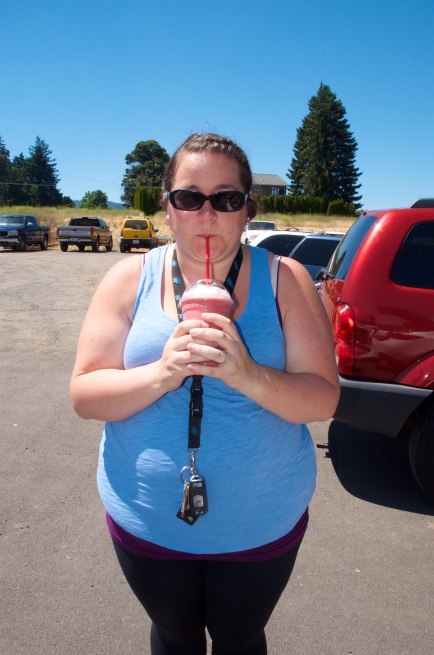 Draper Girls was the next stop – an orchard meets farm meets antique shop.  Great for those of us who love to take pictures (i.e. me!).  We were hungry, hot, and tired at this point, so we made less stops after “lunch” – though still hit Apple Valley (for some jam) Phelps Winey, Cathedral Ridge and Hood River Vineyard for some tastings.  Our last stop of the day was Marchesi Vineyards – My favourite by far.  It was away from the highway, quiet, and the patio had these misting sparklers that kept us cool – which was AMAZING given how hot it was that day.  I could have enjoyed the breeze and coolness of the patio a little longer, but we had seen a hot of heat and a lot of wineries – and we were done (especially Vanessa).  We stopped for a cinnamon bun, and finished up the afternoon with a long nap in our Air Conditioned hotel room before a swim in the pool beside the river, and dinner at the hotel.   A perfect ending to a wonderful day! 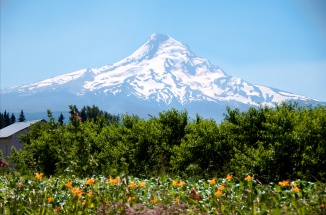 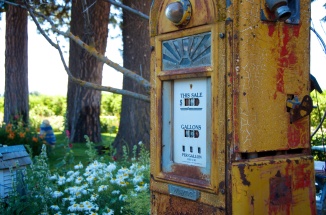