I have typed, and deleted, and retyped the first sentence of this post a few dozen times.

Truth is, there is no adequate starting point.

There are three phases to visiting a concentration camp.  First, disbelief.  Am I really here?  Are these real buildings?  I can’t believe where I am standing.  Hold on, that gate looks just like the pictures.  Second, absorption.  But why?  But where?  But how?  Third, emotion.  Anger.  Tears.

Let me break this down for you.

The ride from Munich to Dachau is an easy one. A 30-35 minute metro ride, followed by an easy and well signed 10 minute bus ride.  The signs above the bus are labeled “Concentration Camp.”  This is not a sign one sees normally while catching the bus.  It already feels daunting.  When we step off the bus it is to enter a visitor centre across the street.  A clear, clear, quiet square shaped building.  Nothing fancy or distracting.  No music playing.  It’s clear very quickly that this place is as a cemetery.  While it takes in many visitors, I would not call them tourists.  And while many are walking with cameras and audioguides, they are not just here to check an item off a bucket list.  Even if they were, that motivation quickly fades. 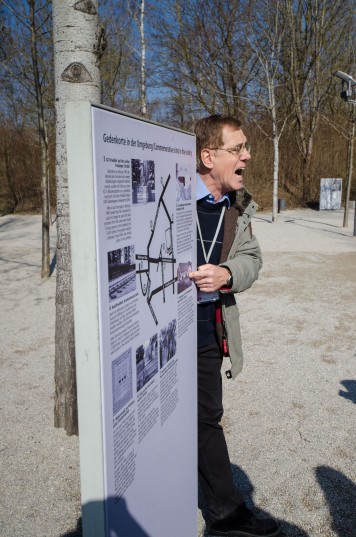 We meet up with our guides, dividing the group into 2 parties.  My group has a guide named Bearnd.  HE.  IS.  AMAZING.  Before we head to the site we stop to talk for a bit.  He gives us the background of the site.  The history.  Tries to help us understand what makes Dachau different.  “Special.”  You see, Dachau was the one concentration camp that never held any Jews.  It held political prisoners mostly.  It was the camp that was built to determine how to run all the other camps.  But the Germans didn’t want Jews to remaining on German soil.  So while they experimented with torture and efficiency on their political prisoners, Jews were shipped across the boarders to Poland, the Netherlands, Austria and the Czech Republic.  Later in the war Dachau did come to hold some Jewish prisoners, but they were not killed here, but shipped off to other camps for that specific purpose, most notably, Auschwitz.

While listening to Bearnd speak it’s still hard to process where we actually are.  We aren’t inside the the gates yet, but after we finish our introduction we walk 100 paces or so to the entrance.  Big black iron gate.  Arbeit Macht Frei.  Work will make you free.  One of the biggest lies every told.  It hits you then.  Where you are standing.

After walking through the gates, most people do the same thing.  Take a few steps.  Then stop.  And then slowly do a 360.  It’s real now.  We’ve had our introduction.  Bearnd tells us about the long walk down the middle the inmates took from the barracks to the mess hall for food.  They weren’t allowed to eat in the hall though.  They had to carry their food back down the cold rocky path.  Many of them fell, or spilled, or both.  If you did, you lost your food.  At best you made it there and back for poor nutrition or with minimal pain.  At worst, it was an exercise in torture followed by starvation. 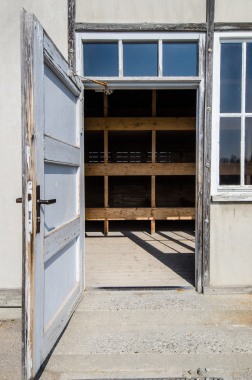 Bearnd takes us into one of the remaining barracks. We sit on the benches in a room surrounded by old wooden beds, stacked 3 high.  It is here he explains to us the badge system.  The various colours used to identify the “crime” one had committed.  Political Prisoner.  Homosexual.  Jehovah’s Witness.  Maybe all of the above.  Every man, woman and child was marked in a way to establish in what way they were lesser than the Aryan race.  After a long walk through the rows and rows of footprints of long gone barracks, we finally reach the gas chambers.  The gas chambers were built here, but not used to kill the living – at least at this site.  But the ovens in the last room were used to burn the dead, who had passed from executions, experimentation, torture, or typhoid epidemics.  Almost 200,000 people were held here during the war, over 30,000 of which died on this site.  During the days, the people were “purchased” for labour by nearby factories.  It was good business for the Germans, selling off slavery at low rates to local businesses, which, outside of munitions factories, included car companies BMW, Mercedes, and VW, as well as Deutsche Bank and Bosch.  Two thirds of the camp were political prisoners, and they were actually fed and treated better than most camps, given their “value” as slave labour.  Bearnd sat with us as we read through the contracts between Mercedes and Dachau.  Each person had a value.  If they were to die, Mercedes received compensation and a replacement.  As if they were parts of a machine that came with warranty. 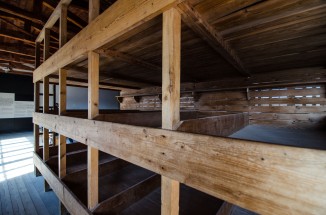 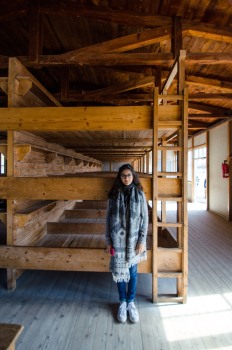 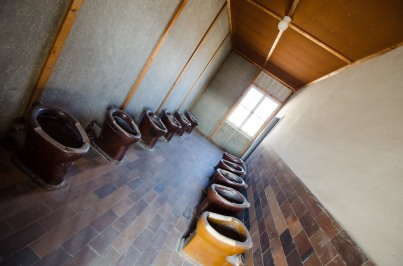 We finished behind the mess hall, which is now a museum.  Bearnd tells us how he came to guide these tours.  He says that his fathers generation won’t talk about the war.  About being in the army.  About the atrocities that they own.  They are silent.  But their children were born into the shame, and came to bear the responsibility for making it right.  For educating others.  For fixing.  For putting good back into the world, where past Germans has brought evil.  Bearnd joined, and spent 35 years in the German army.  He traveled the world trying to help protect others.  He showed pictures of him help liberate a camp in former Yugoslavia in the late 80’s.  Pictures from Africa in the 90’s.  We always say that we need to learn about the Holocaust as to not repeat the mistakes of the past.  But the world is still repeating them.  The picture he shows is from Yugoslavia has been printed in black and white.  When we see it we just assume it’s one from Auschwitz in the 40’s.  It looks the same.  Barbed wire fences and prison jumpsuits on rail thin starved individuals with tattoos on their arms.  But it’s not.  It’s 40+ years later.  And it’s just one example.  He says he is here to educate us because we must do better.  We all carry that cross.  It’s hard to hear. 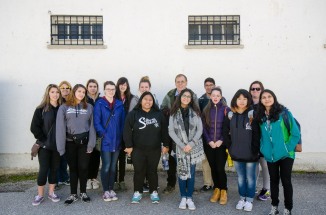 Our tour comes to a close.  I wish I could remember all his words. I wish I would retell all the stories I heard.  I want each and every piece of what he said to be committed to memory.  But it’s been some time now, and the stories have begun to fade.  But the emotion doesn’t.  While I can’t remember every single thing he said, I do remember every single thing I felt.  Pain.  Disgust.  Outrage.  Sorrow.  I can close my eyes and remember sitting on that bench, watching the light stream through the windows and feeling the cold wind bite at me from the door at the end of the wall, and I feel a deep and indescribable sadness overwhelming me.  I wonder sometimes if our minds want us to forget.  It the pain of knowing can be too great.  But we can’t afford to forget.  And so, we move through the camp, trying to understanding, asking “but why?” on repeat, with no adequate answer.  We are left knowing more of the truth then we did before.  Owning more of the pain.  And most importantly, carrying it with us forward to the future.

Because we must do better.

2 thoughts on “Dachau – Lest We Forget”