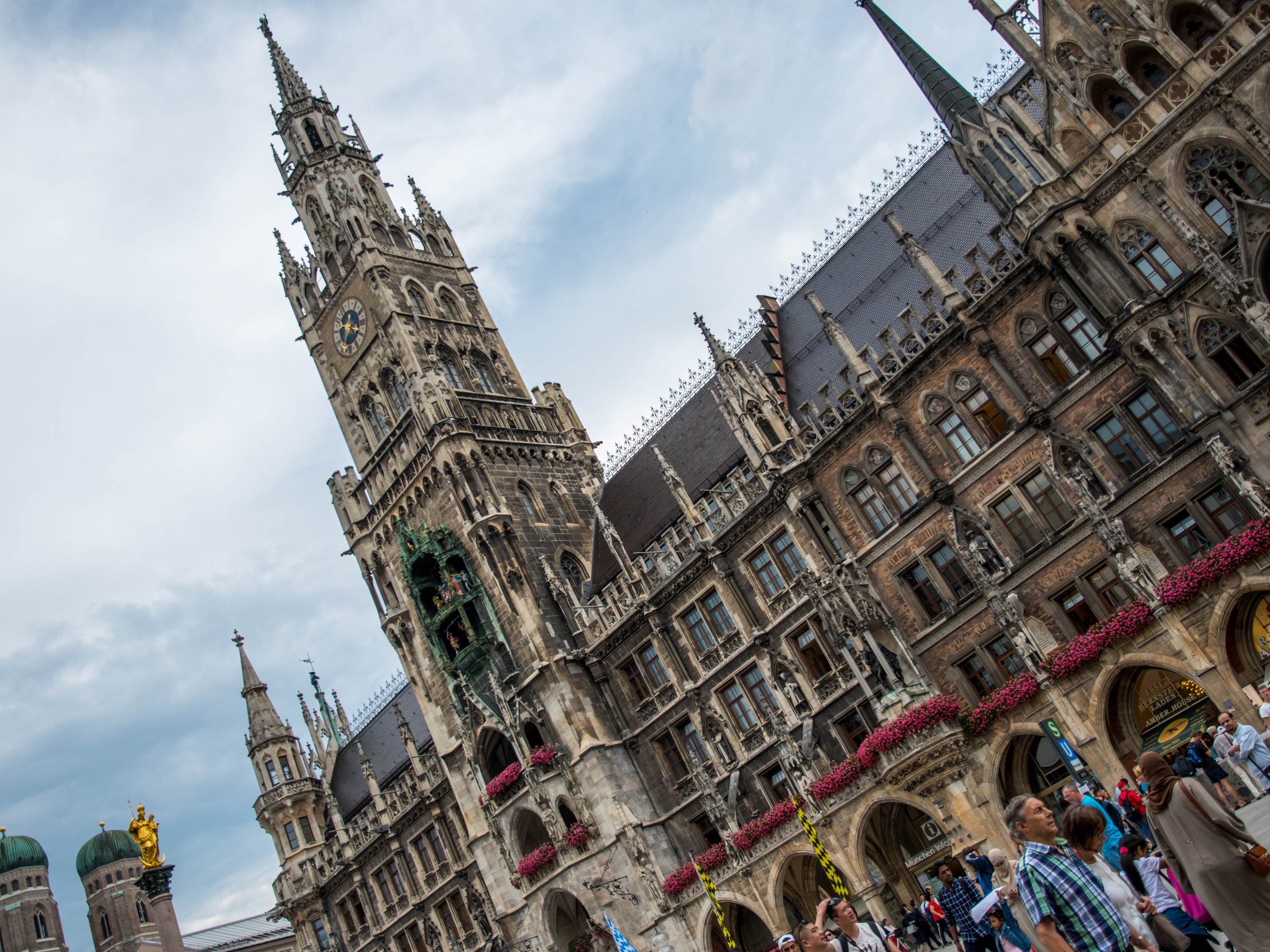 To a story about the most amazing crepe.  Banana.  Nutella.  Whipped Cream.  Little French crepe place east of the river, on the same day the French won the World Cup.  And slow Italian feast on a hot summer night.  And a 400 year old brewery of München fame.  A story of food.

To a story of the past.  A dark and dreary past that, while hard to talk about, is essential we never forget.  A story that must break you, to make you stronger.

To a story of the city Munich has become.  A story of its past, giving way to its present.  Modern Bavaria, with markets, and parks, and equality in the streets.  A version of a better future.

So where should we begin?

When you think of Munich (if you think of Munich), it’s unlikely you think of it as a culinary capital (rightfully so).  And it may be even unlikely you think of it as a city of parks and progressive politics (makes sense).  At best you are currently conjuring up an image of Oktoberfest and Lederhosen, and at worst you are likely thinking about swastikas and a certain creepy moustache.  You see, when it comes to Munich, there are many stories to tell.  And for you to understand this city, you’ll need to understand them all.

While the settlement at Munich existed well over a thousand years ago, the name Munich first came to us in 1158.  It came from an Old German word that meant “by the monks,” because the centre of the town was built on the place that use to be a Benedictine Monestary (In fact, the city flag still has a monk on it).  Munich is part of the state of Bavaria – which was a country before it was a state within the modern Germany Republic.  Why yes, this is history hour.  Bavaria is what you think about when you try to dream up an image of what we now think of as Germany; lederhosen and hats with feathers, large beers, pretzels, and half-timbered houses with cobblestone streets.  Bavaria is rich and old and has an identity of its own.  Its history is rich and people are proud; they are Bavarian first, German second.  They once had a history of wars with Prussia and Austria, and a role in the Holy Roman Empire.  However, the modern Münchener is much more than a story of their past.  Munich is actually a very modern, diverse and progressive city.  38% of Munich’s residence are immigrants.  This includes large populations from Turkey, Croatia and and Italy, as well as those from Kosovo, Iraq and Afghanistan. Munich is full of history, science and art museums, a successful football team (Bayern Munich), a huge public park (English Garden – one of the largest public parks in the world), a beautiful river (the Isar), bike lanes and public transit (who needs a car), and a supportive and celebrated LGBTQ community (out in full force when we were there during Christopher Street Day during their Pride Week). 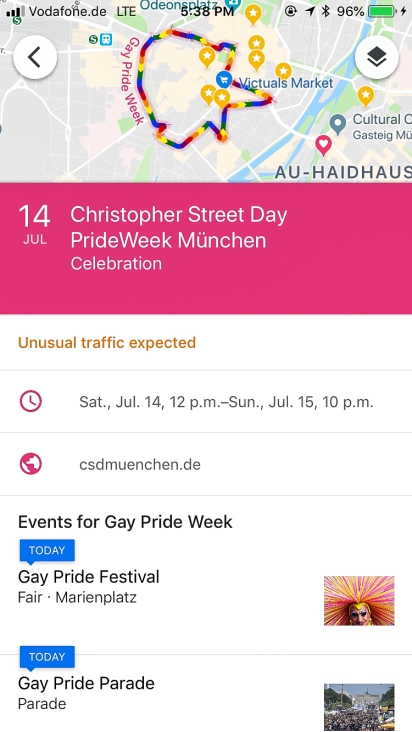 In the English Garden, the locals go out to enjoy a beer or a picnic.  There is a small nudist section of the garden (be forewarned), and a stream running through where you can sink in your toes to cool down while talking with your friends.  3.7 square kilometres of grass, gardens, pagodas, bike paths, beaches and waterways.  There is also the famous Eisbach – a wave in the river that can be surfed.  After many trips to Munich, I finally made it to the garden to watch the surfers.  What is equally impressive to the surfing is the level of organization they have about who goes next and where to go once you are done – like there are unwritten rules that all the locals just know and abide.  Every trip I have taken to Munich I have made plans to go biking in the English Garden, and every trip, due to snow, sick children, or happenstance, I have missed out.  While I got to walk by the park this time (for a few short minutes), I still haven’t fully given the garden its due.  Next time.

In addition to the gardens, the locals can be found down by the river.  Or in the river.  The Isar isn’t deep, and flows slowly enough for it to be safe, and to top it off, it’s clean.  This combination of ingredients make it a wonderful place to spend a Sunday afternoon.  The locals were down with chairs, towels, swimsuits and, of course, beer, to frolic in the water.  Yes.  I saw actual frolicking. 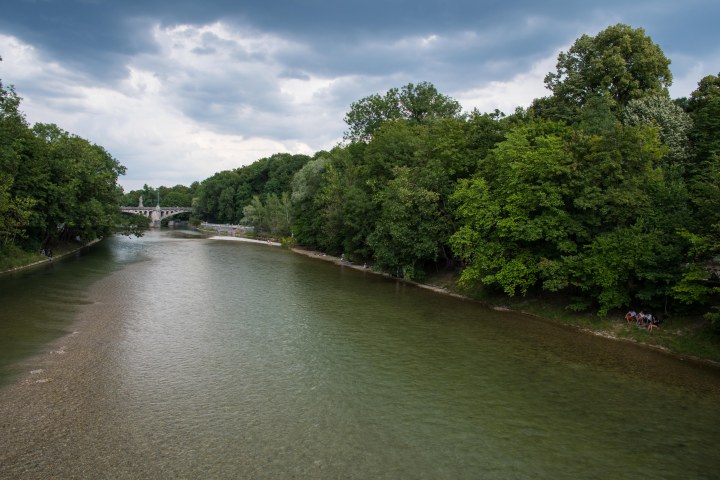 The Viktualienmakrt is another highlight.  A great place to celebrate local ingredients, with stands selling fruit, spices, oils, fish, coffee, potatoes, and, of course, beer.  There is a beer garden in the market that rotates through the 6 major Munich breweries, serving only 1 at a time.  You can order by the litre, or half litre if you aren’t feeling quiet up to the task.  Bring your own food or purchase from the various eateries, pull up a table with your friends (or make some new ones), and enjoy the local music and ambiance. 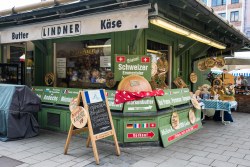 While the buildings around Munich are old, the life inside Munich is new and relevant.  Munich society is built on love and respect, for each other, and for the world around them.  In our 3 days in Munich I walked over 40 km, through the gardens, streets, stores and pharmacies, through main squares, past historical monuments, over bridges, and alongside the river.  And yet, I still feel like I have so much to see and learn about this vibrant city.  Moral of story #1: don’t put Munich in a corner.  It’s so much more than you’d imagine. 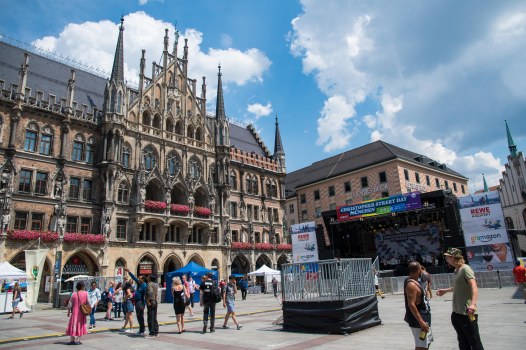 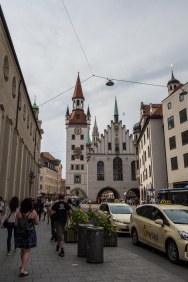 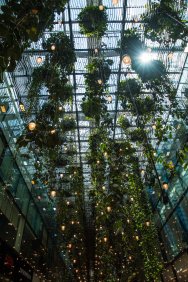 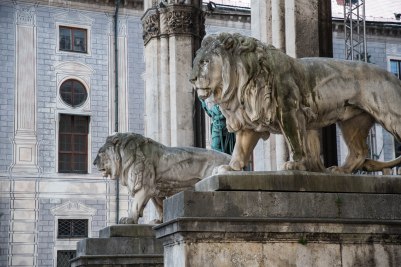 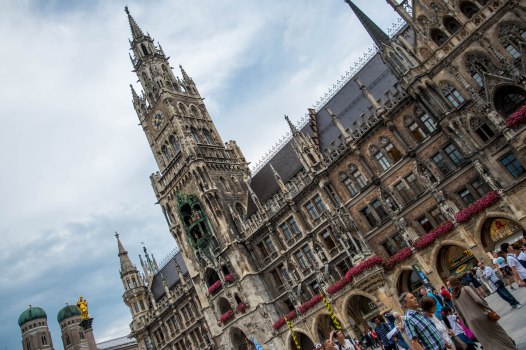 As I said, this isn’t my first trip to Munich.  In fact, this is my fourth visit in the last 5 years.  And we went to Dachau.  Now, I have written about Dachau before (see here), the first time I went.  And then I went again.  And now, again.  So why would we go back?  Three times?

No, it’s not because I’m all dark and twisty inside.

“We must take sides.  Neutrality helps the oppressor, never the victim.  Silence encourages the tormentor, never the tormented.  Sometimes we must interfere.  When human lives are endangered, when human dignity is in jeopardy, national borders and sensitive become irrelevant.  Wherever men and women are persecuted because of their race, religion or political views, that place must – at that moment – become the centre of the universe.”

I revisit sites like these, wherever I go, over and over, because it reminds me of why this is so incredibly true.  And reminds me that we all need to have the courage to take sides.  That silence is not acceptable.

On this specific trip, Ray and I worked our way through the museum, reading every fact and story.  We had seen the baracks and creamatoriums on visits past, but this time we wanted to hear the voices of the people.  To know a deeper truth.  And I’m really glad we did.  I don’t fully understand a world where it was possible for any one group to think they were (or are) superior to another.  To TRULY BELIEVE that is was (or is) acceptable to treat innocent people the way they did (or do).  I don’t understand them.  Then again, I’m not sure I really want to. 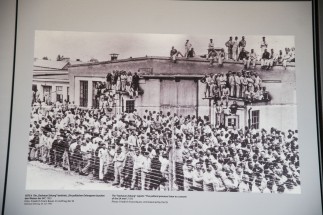 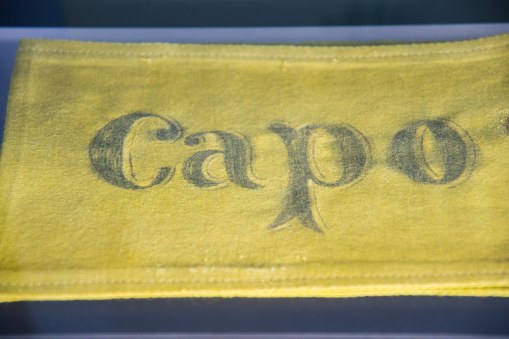 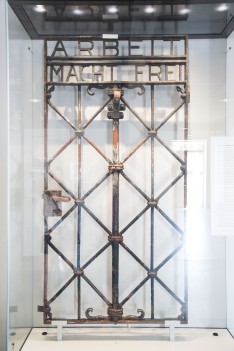 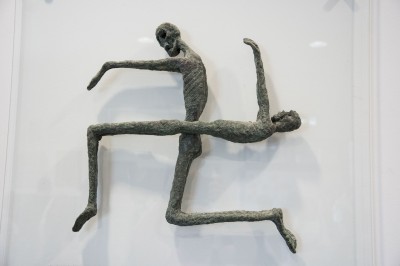 After the museum, we walked the property to the memorials and chapels at the back, that we had yet to visit on our previous trips.  Something was off.  We had visited the site before, but in the winter, when the trees were bare and skies were grey.  Everything was muted and cold and dark.  It felt as it should be.  But to walk among the strong, tall, green trees reaching into the blue sky with cotton candy clouds – well – it just felt wrong.  It felt too bright and happy and optimistic for this kind of place.  It felt uncomfortable.  For moments it made me angry.  Like the sun had no right to be there.  I wanted to shake my fist and scream into the blue until someone listened the put away the sun.  It’s hard to explain what is feels like to be here.  If you let it, it can torment you.  But if you don’t open yourself to it, you won’t get it.  It’s a challenge.  But lean into it.  Don’t be afraid.

The Bavarian Beer Purity Law of 1516 said that beer in Munich was only allowed to be made with natural ingredients.  This law still dominates Munich beer production to this day, and has led Munich to produce some world quality beers, that are truly their best when served inside the city limits.  There are SIX breweries in Munich: Augustiner, Hacker Pschorr, Hofbräu, Löwenbräu, Paulaner and Spaten.  Augustiner is the oldest (dating back to 1328), but Hofbraü is the most famous outside of the city.  The Hobraühaus is one of the most famous tourist attractions in the city.  And while members of our traveling party (not me, because beer, ew) enjoyed this liquid bread in all restaurants and gardens, we also did went to the Hobraühaus.

The Hobraühaus is a Munich institution.  Three stories of beer halls, inside and out, there is room for thousands to dine and or drink to their hearts content. (It also has a room upstairs where Hitler and the Nazi party use to meet back in the 1920’s – but let’s not speak of that).  After 6:00 PM all beers (except the Weissbier) are sold by the litre only.  So buckle up.  Some families have been coming here for decades (or centuries), and have reserved tables for certain nights, days or times.  If you have committed long enough, and attended a minimum number of weeks without missing (in excess of 150 consecutive weeks), you earn the right to have your mug locked up in the stein lockers.  Servers in dirndls and lederhosen impress the tourists and locals alike as they carry 8 one-later glasses to a table without spilling a drop, and take orders from travellers in many languages.  The menu features a hearty assortment of things, the majority of which are pig or potato in nature.  I would never claim they serve any culinary masterpieces, but you don’t come for the food as much as you come for the experience (let’s be honest, “German” cuisine isn’t exactly the most extraordinary to begin with).  The hats, the giant steins, and the tubas and accordions playing traditional Bavarian music make it the perfect place to feel like you experienced the Bavarian stereotype.  I would normally avoid a place like this, overflowing with tourist, except it’s also overflowing with the locals.  The Hobraühaus is just one of MANY beer halls in Munich.  Inside, outside, historic, modern, craft brew, big 6, breakfast, dinner – there is a beer hall for every occasion.  So if you are ambitious, take on Munich, Pokemon style. 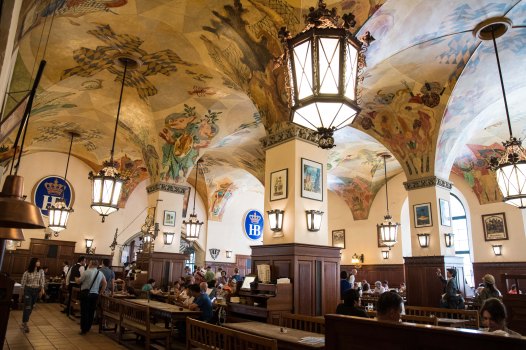 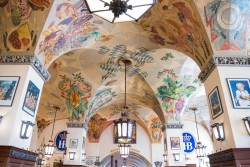 Now, if you have spent more than 3 consecutive days in Germany, you might know, as I do, that there is only so much schnitzel, sausage and sauerkraut that one can handle.  By day 4 you are crying “please, please, anything but potato salad or French fries.”  But here’s the thing – there is GREAT food in Europe.  Munich has a huge immigrant population, from neighbouring European countries and elsewhere (see story #1).  And many of them open their own restaurants.  And they are GREAT.  This trip we had some extraordinary crepes, and a great Italian meal (complete with the Italian slow dining experience).  Last time we dined on some tasty Turkish cuisine.  Moral of the story, any city in Europe can be a great foodie city if you want it to be.

And so there you have it – three stories of Munich.  Have you been?  Do you have a story of your own to add? And if not, which story would entice you most to visit?